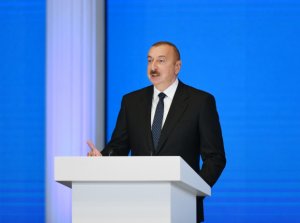 Personnel reforms are underway, which is a necessity, we cannot allow stagnation, the stagnation of the Soviet era has not yet been forgotten. Therefore, it is necessary to carry out personnel reforms, but in the natural way, through evolution, no deviations can be allowed,’ Azerbaijani President Ilham Aliyev said at the ceremony on the occasion of the 100th anniversary of the establishment of Baku State University.

‘After I expressed my thoughts on this issue several times, some began to count the age of people, saying that he is already 70 years old, he must leave. But it should not be so. Then I said that I would not allow such a campaign to be conducted. The synthesis of experience and knowledge, on the one hand, and dynamism, innovation of youth, its tendency to renew and reform, on the other hand, all this exists in Azerbaijan. And in the society as a whole, and in government structures. We are building a state on the basis of traditional values, including the concept of seniority and minority. We must protect this, let the youth hear me, let them show respect to the elders. Some countries no longer pay attention to this. There is no more difference between men and women,’ he said.

The head of state noted that ‘we live and must live in a traditional society.’

‘We must respect women, we must protect them. Not they us, but we them. There is gender equality, and we accept it. But we cannot live outside traditional thinking, and let the younger generation know this. Older people need to be respected because of their age. Today, some are trying to exclude from our vocabulary the words ‘agsakkal’ (‘whitebeard’ – fig. an elder man – Ed), ‘agbirchek’ (‘whitehair’ – fig. an elder woman – Ed), as is the case in some countries. Looking at them, I am horrified. And after that they tell us: integrate. At the time of the economic crisis in Europe, I said: where should we integrate? Integrate into a crisis? Integrate with those who say ‘Stop Islam’? With those who do not make a difference between a man and a woman?

I do not want to go even deeper. We will absolutely not integrate into all this. Therefore, in Azerbaijan, both the young generation and the older generation should be together, as in universities. For example, at Baku State University there are thousands of young people, there are also teachers. Teachers share their knowledge, young people study, and tomorrow they will replace them. We must develop that way. Naturally, personnel reforms should be continued further. But this should not turn into a campaign,’ the president said.