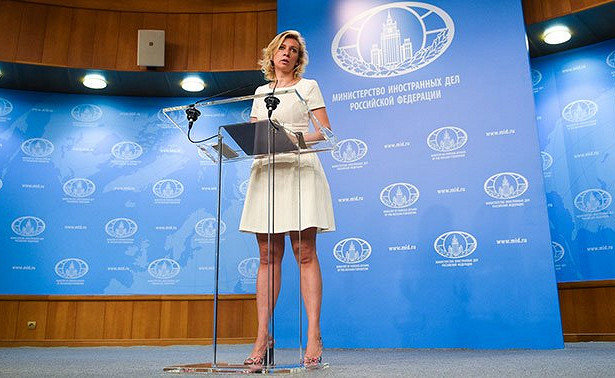 http://azeridaily.com/society/53583Conference ‘Baku-Moscow: Dialogue of Cultures’ continues its work in Baku. In particular, Spokesperson for the Russian Foreign Ministry, Maria Zakharova spoke at the conference. Immediately after her speech, the floor was given to the Editor-in-Chief of the Information and Analytical Portal ‘Haqqin.az,’ Eynulla Fatullaev.

‘It is very symbolic that Mr Gusman gave me the floor after Maria Zakharova. I well remember our unpleasant dialogue and I hope that it will remain in the past,’ he said.

Eynulla Fatullaev noted that for some reason Maria Zakharova considers the website haqqin.az, which he leads, to be anti-Russian.

‘Our site is based on the principles of political pluralism, but I declare with all responsibility that we have the most friendly attitude towards Russia. Moreover, the level of Azerbaijan’s attitude to Russia is defined in a clear formula by Ilham Aliyev: Russia is a guarantee of stability in the region. Zakharova now said about those who come with ready-made recipes. So, they have already come to our neighbours with these recipes and manage Armenia with these recipes,’ he said.

Eynulla Fatullaev emphasised that Maria Zakharova should understand that Azerbaijan is the only sincere ally of Russia in the Caucasus.

‘The time will come and this will be understood,’ noted the journalist noted.

The editor-in-chief of haqqin.az called it symbolic that this conference is dedicated to the anniversary of Mikhail Gusman, who played an outstanding role in strengthening relations between the two countries.

‘A few days ago, Gusman himself in an interview with our site quite accurately determined the current level of relations: never in the history of these relations have they been so strong. And this is his outstanding merit. But one thing bothers me: a strong alliance of the two leaders is not supported by the public alliance of our countries. There is a vacuum under the alliance at the top. After a new round of tension around the Iranian issue, when they spoke again about the reality of war, the Azerbaijani public was very concerned. After all, all this is happening on our borders. But at the same time, awareness of the proximity of our ally Russia gave society confidence. These attitudes are an indicator of the true attitude of the Azerbaijani people towards Russia,’ he said. Source: http://azeridaily.com/society/53583