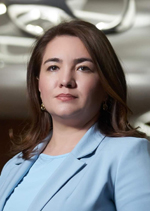 BAKU, Azerbaijan — “I was tortured, sold in the black market. But I am free now. I can go anywhere in the world, except Shusha.” This is what Princess Natavan says in my recurring dream — a dream that is particularly vivid this week.

It has now been 30 years that Azerbaijani residents of the Karabakh region of the Republic of Azerbaijan were expelled from their native lands. The city of Shusha fell to the Armenian occupation on May 8, 1992. The Armed Forces of Armenia brutally murdered 200 people, took hostage more than a hundred civilians, and expelled over 22,000 Azerbaijanis from their hometown.

Tank commander Albert Agarunov — the Jewish recipient of the National Hero of Azerbaijan, the country’s highest military recognition — was killed while trying to save his fellow soldiers as they defended Shusha. Azerbaijanis look to Agarunov’s story as a powerful reminder that Azerbaijan’s Jews are integrated as citizens with the same rights and responsibilities as their nation’s Muslim majority, in addition to Baku’s longtime warm relationship with Jerusalem.

Raoul Lowery Contreras, author of Murder in the Mountains: War Crime in Khojaly and the Nagorno-Karabakh Conflict, has written for the San Diego Jewish World that Agarunov’s National Hero status in Muslim-majority Azerbaijan “is a two-way historic accomplishment we should all realize in considering the ongoing half-century dispute between Israel, a Jewish state, and Muslims.”

Shusha was founded by Princess Natavan’s great grandfather, Panahali Khan, in the middle of the 18th century on the highest site of the Karabakh province. It grew to become a significant political, economic, and cultural center in the entire region. It was home to great Azerbaijani poets, writers, musicians, actors, and intellectuals. Shusha was often described as “the Conservatory of Caucasus” as it had a distinctive school of vocal art. The composer of the first opera in the Muslim East, Uzeyir Hajibeyli, folk art performer mughamist Khan Shushinski, La Scala trained vocalist Bul-Bul, and many other prominent voices gave the same significance to Shusha in the Caucasus, like Italy in Europe.

None of the heritage reflecting centuries of civilization inside Shusha’s fortress was saved. The Armed Forces of Armenia vandalized the Ganja Gates, the Castle of Panahali khan and his library, the 19th-century Govharaga mosque, Caravanserai (a historic hotel that used to host visitors from near and far), and the Museum of Shusha with its collection of 5,000 exhibits.

The international community recognizes the occupied lands of Karabakh as the territory of the Republic of Azerbaijan. Yet for three decades, Azerbaijanis have not been able to exercise their basic human rights and return to their homes. Instead, internally displaced, they are scattered across Azerbaijan, hoping for peace and coexistence with their Armenian neighbors as they had before.

Princess Natavan — known for her pen name Khurshid Banu — was a prominent female poet, artist, and educator in Shusha who further diversified the cultural legacy of this small, yet magnificent town. Her talent, analytical mind, immaculate taste, and great care for her people marveled French colleague Alexandre Dumas when he was crossing the Caucasus in 1858.

Natavan’s home museum, the spring water fountains built under her observance, and all related monuments were destroyed by the Armed Forces of Armenia in 1992 when they invaded the Nagorno-Karabakh region.

Last December, I spotted her bronze figure “standing” in the city of Waterloo, Belgium, next to the public library. I felt incredibly proud of the shared humanity that embraced this forward-looking intellectual woman thousands of kilometers away from her hometown. However, with sadness, I realized that even in bronze she can travel anywhere but home.

Penetrated by bullets “the Daughter of Khan’s” monument, along with other statues of the famous Azerbaijanis from Karabakh, were dismantled by Armenia after the occupation of Shusha and sent to neighboring Georgia to be sold as a scrap metal in the black market. Fortunately, the Ministry of Culture of Azerbaijan rescued the bronze statues and brought them to Baku, where they are hosted now in the yard of the National Art Museum as the mute witness to the “Burnt Culture” of Karabakh.

On the day Armenia’s prime minister visited Brussels in March, Natavan’s monument in nearby Waterloo was vandalized. Her restless soul will keep traveling to Azerbaijanis’ dreams until she finds peace by going back home, to Shusha.

The author writes on behalf of the Azerbaijani Community of Nagorno-Karabakh.
Source: https://www.sdjewishworld.com/2020/05/08/dream-of-azerbaijans-bronze-woman-lives-on/?fbclid=IwAR2tH0LbWIpRsUbR8i90ZNpQdVKFuyM7CBD9_uIRk9sXtMfHCTiWmJiwnmo