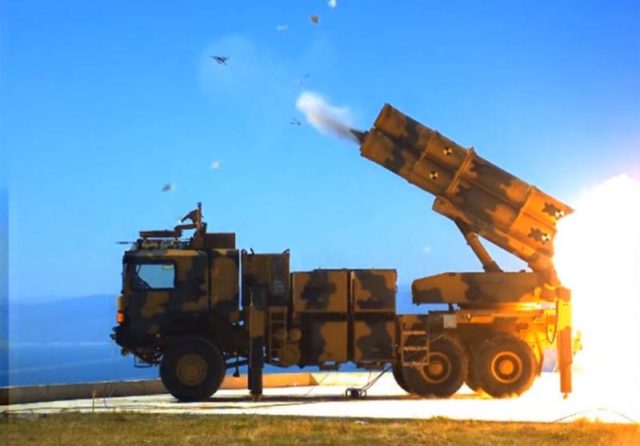 Baku has initiated large-scale weapons readiness efforts in Nakhchivan. The official YouTube channel of the Azerbaijani Ministry of Defense features a video showing Turkish-manufactured multiple-launch rocket systems (MLRS) stationed in the strategic western exclave (YouTube, May 2). Of these arms, the 300-millimeter TRG-300 Kaplan (Tiger) deserves special attention, particularly in light of the delicate regional military balance between Armenia and Azerbaijan.

Produced by Roketsan, the TRG-300 Tiger is the latest variant of Turkey’s 300-millimeter-class MLRS. It fires a fairly accurate rocket with a circular error probable (CEP) of less than ten meters thanks to its global positioning (GPS)- and inertial navigation system (INS)-supported guidance features. With a 105-kilogram warhead configuration, the Tiger has up to 120 kilometers of range and effective radius of some 70 meters; while the heavier, 190-kilogram warhead option (Block-2) has a range of 90 kilometers and around 80 meters of effective radius, prioritizing overwhelming firepower. Both warhead configurations enable high-explosive and steel ball variations (Roketsan.com.tr, May 12).

The TRG-300 Tiger is designed to annihilate a broad array of critical target types, including troop concentrations, high-importance facilities, command-and-control (C2) and radar sites, as well as artillery and air-defense systems (Roketsan.com.tr, May 12). During the February 2020 escalation with the Syrian Arab Army in Idlib, the Turkish military deployed the Tiger MLRS to the front lines (Aksam, February 21).

Militarily, Nakhchivan enables a second offensive route in addition to the Line of Contact around Karabakh, which has the potential to overstretch the Armenian forces in a multi-front war (see EDM, August 3, 2017, June 4, 2018, June 12, 2018, July 11, 2019; Bellingcat.com, October 4, 2017). Such an assault could unfold in one of two ways. Azerbaijan’s SCAA can opt to launch an offensive directed at Armenia’s capital, Yerevan, in an effort to distract the Armenian formations. Or it might cut into the critical lines of communications between Armenia and the Armenian forces in Karabakh. Until 2016, such scenarios were deemed rather improbable. However, following the serious April 2016 clashes, known as the Four Day War (see EDM, April 6, 2016 and May 5, 2016), the Azerbaijani forces proved that their newly gained capabilities could deliver a much more effective assault compared to their unsatisfactory showing during the 1990s (Chathamhouse.org, July 2016).
Source:https://jamestown.org/program/turkeys-heavy-tiger-rocket-spotted-in-azerbaijans-nakhchivan-exclave/