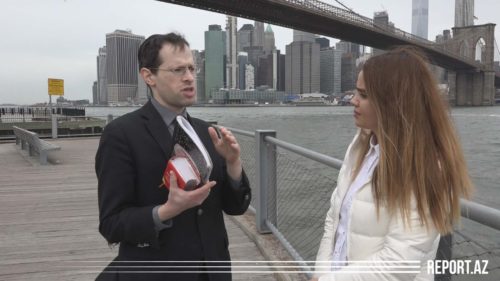 The ancestors of Yahuda Latimer moved to the United States from Mongolia. He graduated from Brooklyn College. Y. Latimer is well aware of the history of Azerbaijan, the past, and the customs of our country. In an interview with Report’s special correspondent, he noted that five years ago, he discovered the most beautiful country in the world and began to study the Azerbaijani language in the dictionary.

“I love the Azerbaijani people, Azerbaijani literature, architecture. In the hope of finding an Azerbaijani interlocutor, I participate in events held in New York in connection with Azerbaijan. Every day I read books in Azerbaijani. In my opinion, there is no longer a country like Azerbaijan in the world. You have a beautiful religion, a friendly and hospitable nation. Nizami Ganjavi, Mohammed Fizuli – great thinkers and poets. The opera “Leyli and Majnun “, heroes like Babek, Epic of Koroghlu – a true treasury.

Latimer studied national holidays and even tried Novruz dishes: “Azerbaijani dishes are delicious. Dushbara, Fisinjan are yummy. Shekerbour and baklava are also incredibly delicious. I will try them in Baku.

Touching on the Khojaly tragedy, Latimer noted: “I do not understand the silence about this tragedy. I read articles of American journalists about the Khojaly tragedy. It could not be untrue, as photographs and documentary evidence accompanied the article. We must not forget the Khojaly tragedy. I hope that justice will prevail, and Karabakh will return to Azerbaijan. I am a US citizen, but Azerbaijan is a part of my soul. ”
Source: https://report.az/en/education-and-science/young-american-learns-azerbaijani-language/