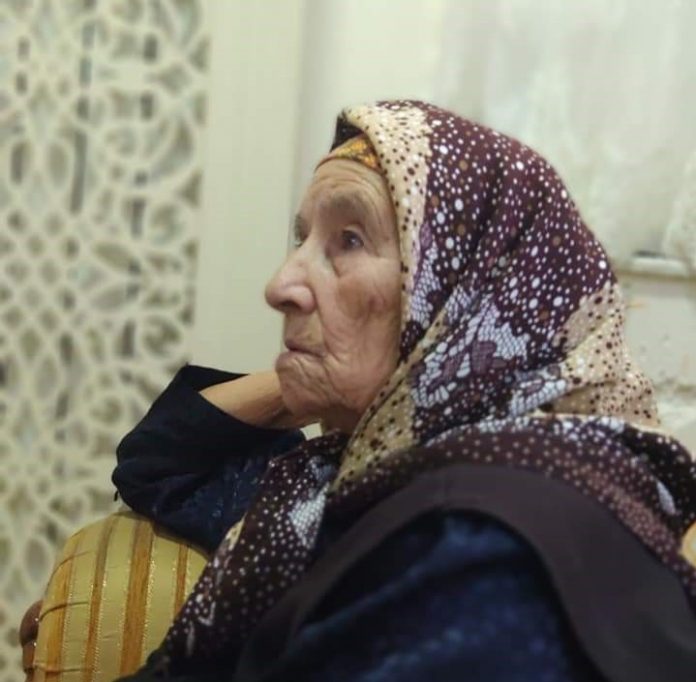 By The London Post -8th July 2020
By Aybaniz Ismayilova

Since the beginning of the summer season Baku has grown quiet on every weekend- mostly the wind walks the streets of this “City of Winds”, eagerly searching for people among buildings, who safely shelter themselves at homes to decrease the statistics of the pandemic.
My 96-year-old grandmother Sarabayim Mustafayeva watches the streets from her window with a calm look- her relationship with confinement has a three-decade long history by now. She spent almost 70 years of her life admiring a different scenery: lush forests of mountains and grazing cattle. Life in her native village of Baharli, in the Zangilan region of Azerbaijan had a unique pace, feel, touch and smell, and not a day goes by when she doesn’t mention it. Although the memories grow weaker in her aging mind with every passing year, the determination to return home only gets stronger. She wraps up her daily routine by watching the TV news in the evening and putting her hand to her ear, not to miss the long-awaited headline about the end of the illegal occupation of Zangilan by the Armenian militants. In her other hand Sarabayim squeezes the key to the house she left there- we could never bring ourselves to tell her, that it might no longer stand.

The disruption brought by the current pandemic is not the first in Sarabayim’s life. A mother of seven children- five of her own and two from the previous marriage of her husband, Sarabayim’s life got turned upside down at the age of 38, when she became a widow. It meant raising the kids and educating them all by herself.

By the time that mission was accomplished, and she was ready for her well-deserved peaceful retirement, another disruption came in the form of a forced exile. In 1993 she joined thousands of her compatriots who got expelled from their homelands as a result of the Armenian occupation of the Karabakh region of Azerbaijan.

Our family already lived in the city at the time. Grandmother moved in with us. The sixth-floor apartment became her new shelter. But, as much as she tried, she couldn’t find a place for herself, pacing all day between the concrete walls. She never unpacked her bags, never let herself get comfortable, and never made peace with her “sophisticated cage” without the orchard, trees, and the mountains of Zangilan.

Life continued. Since 1993 it took away two of her children- she had to bury them in separate cemeteries wherever she could find the plot in the big city. A few years ago, we bought the lot in the outskirts of Baku, where we built a house for ourselves and my grandmother Sarabayim. Only after she moved into that place and had the opportunity to live among trees again, she was able to relax a little, letting us to rediscover her.

My grandmother is a symbol of longing, expectation, and hope for me. The symbol of the tens of thousands of displaced grandparents, who spend their days, months, and years in confinement waiting for the day when they return to their homeland, and houses which they locked “for a bit” till the speedy return. For them, what they left behind was not just the houses. Because for them, a “house” is more than just four walls, stone and wood- it has a metaphysical meaning, what we, here in Azerbaijan, call an “ocaq”- a “hearth”, the basis that spreads warmth, light and life to us and our descendants, the place where the guardian spirits of ancestors come to check on us, the fire that we keep going with our values, beliefs and prayers.

Sarabayim is waiting to return to that “hearth”, refusing to adopt her city life. Many of her contemporaries died in exile laying foundation for “the IDP cemeteries” wherever they were scattered. My grandmother sees herself as their Ambassador, resilient and determined to lay foot again into her Zangilan. Only then the spirits, just like the people, will find peace, and Sarabayim will finish her fight.

Until then, she calmly watches the streets of the pandemic overtaken Baku, saving her up her death.

(Aybaniz Ismayilova, Head of International Relations Department, Azerbaijani Community of the Nagorno-Karabakh region of the Republic of Azerbaijan)
Source: http://thelondonpost.net/azerbaijan-conflict-resilience-ambassador-in-the-time-corona-covid19-of-pandemic/?fbclid=IwAR3pJ3MR0y92ASQGphDw_Q9Twyv8YP-fo-Z4rGK-M4Tw0bfxSGIeqFCGdUI