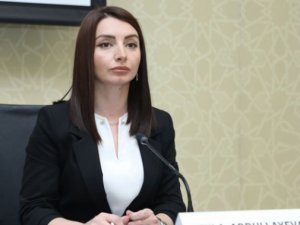 Azeridaily.com: Foreign Ministry on resettlement of Lebanese Armenians to Karabakh
Armenia is making attempts to illegally resettle the Armenian population from some Middle Eastern countries to Nagorno-Karabakh and adjacent districts of Azerbaijan, which are internationally recognized territories of Azerbaijan. Leyla Abdullayeva, Head of the Press-Service of the Ministry of Foreign Affairs of Azerbaijan, said this when commenting on the reports on the resettlement of Lebanese of Armenian origin to the occupied territories of Azerbaijan after the explosion in Beirut.

It should be noted that yesterday, Serdar Unsal, deputy head of the Turkish-Azerbaijani Friendship Society, published a statement, noting Armenia’s attempts to resettle Lebanese Armenians to Nagorno-Karabakh.

‘As is known, the illegal activities of the aggressor-Armenia in the occupied Nagorno-Karabakh and our adjacent territories, as well as the policy of illegal settlement, are raised by us within the framework of international organizations.

This is not the first time that Armenia, using the situation in the region for its disgusting purposes, has attempted to illegally resettle the Armenian population from some Middle Eastern countries to Nagorno-Karabakh and adjacent districts of Azerbaijan, which are internationally recognized territories of Azerbaijan.

The fact of illegal settlement carried out by Armenia is also recorded in the reports of the OSCE fact-finding missions.

Of course, these actions by Armenia are a gross violation of international humanitarian law, as well as the 1949 Geneva Convention and its additional protocols.

The goal of the occupier-Armenia is to artificially increase the number of Armenians in these lands, change the ethnic and cultural characteristics of the territories, and thereby carry out a policy of annexation.

We expressed to the OSCE Minsk Group co-chairs our serious dissatisfaction with Armenia’s policy of illegal settlement in the internationally recognized territories of Azerbaijan, as well as Armenia’s intention to use the tragedy in Lebanon for its own illegal purposes.

Armenia must understand that these illegal actions and attempts at artificial settlement will not give the results expected by Yerevan. The Azerbaijani population of the occupied Nagorno-Karabakh and adjacent territories will return to their homes, and the occupant Armenia will be held accountable for all its illegal actions. Our demand to put an end to the purposeful policy of Armenia to settle the occupied territories of Azerbaijan will continue to be resolutely put forward before the international community,’ said Leyla Abdullayeva.