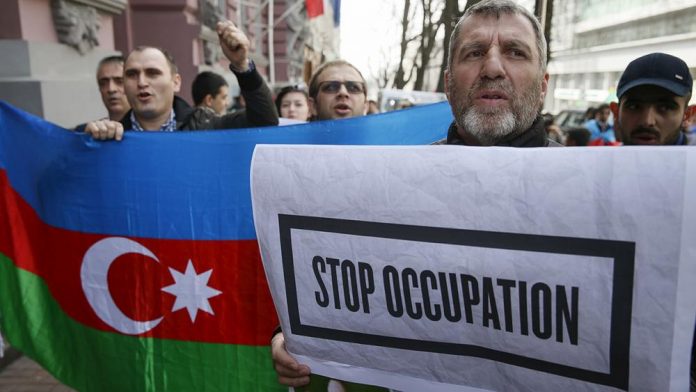 Twenty percent of Azerbaijan’s territories fell under the control of neighboring Armenia as a result of the 1988-1994 war the latter launched against Azerbaijan. The occupied territories include the Nagorno-Karabakh region and seven adjacent districts which have been recognized by all the states and international organizations as belonging to Azerbaijan. Every inch of these territories is considered sacred by most Azerbaijanis who vow to liberate them at any rate sooner or later. It is therefore only for the analytical purpose of this article that the importance of one part of the occupied region, the Shusha city, is exclusively underscored. Shusha was originally established in 1752 by Panah Ali Khan, the first ruler of the Karabakhkhanate, as a fortress to stave off the attacks by his rivals. This particular location was chosen due to the area’s geographic location at the 1300-1600 m. altitude surrounded by stiff cliffs which made it inaccessible for enemy attacks.
Previously known as Panahabad after Panah AliKhan, the city reportedly gained its modern name following the attacks of Mohammad Shah ofthe Persian Empire during the rule of Panah Ali Khan’s son, Ibrahim Khan. Legend says that the Shah wrote a letter in verse to Ibrahim Khan, saying: “Look, God is‘pouring stones’ on your head from heaven. How can you sit in that ‘glass fortress?’” What he meant was: “We’re going to raze your city to the ground, as though it were made of glass.”Ibrahim Khan’s self-confident answer was: “I know that God will protect me even in this‘glass.’” The city succeeded to rebuff Shah’s siege thanks to its geography in addition to the dedicated mobilization of the residents. After that, the city came to be known as “Shusha,” which means “glass” in Azerbaijani.The city marked an impressive progress in the following decades, particularly in sphere of culture. Often called the “Conservatory of the Caucasus”, the city gave birth to many famous artists, musicians and poets. For example, Uzeyir Hajibeyov, the founder of Azerbaijan’s composed classical music and opera, and@the first composer of an opera in the Islamic world,was born and grew up in Shusha.

The city was the birthplace of Azerbaijan’s famous tenor Bulbul, a 19th century Azerbaijani poetess Khurshid Banu Natavan. Molla Panah Vagif, Azerbaijan’s 18th century poet who founded the realistic trend in Azerbaijani poetry was born and lived in Shusha for his entire life. The city’s contributions to Azerbaijan’s culture flourished in the 20th century with the birth of renowned conductor Niyazi and famous singers Seyid and Khan Shushinski. Throughout its history the city was predominantly settled by Azerbaijanis and, in 1989, was home to 20,579 people whose 1,377 were ethnic Armenians. In the course of the full-scale war Armenia waged against Azerbaijan in the early 1990s, the city fell under former’s control on May 8, 1992. As a result of the occupation of Shusha, 480 civilians were killed, 600 wounded,22,000 displaced. Nothing is known about the fate of 68 who were taken hostage by the Armenians.The occupation put an end to the rise of the Shusha city and made it subject to relentless cultural genocide, as Armenians, in an attempt to erase the imprints of Azerbaijanis, destroyed or misappropriated the cultural icons of the city. According to the official reports, 279 religious,historical and cultural monuments have been destroyed, including Khan cave, Gakhal cave and the Shusha castle.

One of the most recent of such acts against the cultural monuments of Azerbaijanis in Shusha occurred recently vis-à-vis the Yukhari Govkhar aga mosque, founded by Govkhar aga, Panakh Ali Khan’s daughter in 1883-84. Under the guise of “restoration”, Armenians sought to change the historical and cultural significance of the monument and presented it as “a center of Persian culture”. Azerbaijanis were particularly outraged by the involvement of the Iranian companies in this process which they characterized as a blatant violation of the interstate agreements between Azerbaijan and Iran.
Familiar with the exclusive moral importance of the Shusha city for Azerbaijanis, Armenians make consistent provocative moves, including of political nature, concerning the city. At least twice over the last few months, the city was subject to such provocations. First, on May 21, an “inauguration ceremony” was held in Shusha for the “newly-elected” leader of the occupational regime Armenia established in the Nagorno-Karabakh region.

Azerbaijani MP, Chairman of the Azerbaijani community of the Nagorno-Karabakh region of Azerbaijan,Tural Ganjaliyev, stated that “This provocation with the participation of the Armenian political leadership was arranged in the building of “Azerbaijan” cinema in the occupied Azerbaijani city of Shusha”, adding that this served only one purpose – to disrupt the peace negotiations.In the early August, few weeks after the clashes between the armed forces of Armenia and Azerbaijan on the state border between the two countries, Armenians, taking the advantage of the moral value of Shusha for Azerbaijanis, made another provocative move.

The head of the separatist regime of Nagorno-Karabakh announced his intention to move the “capital” of the region and local “state structures” to Shusha from Khankandi. Reacting to this, Ministry of Foreign Affairs of Azerbaijan declared that “Armenia must stop testing the patience of the international community, and first of all the Azerbaijani state and society, by its illegal actions and provocative statements.”

Truly, against the backdrop of the admitted failure of the peace talks in the existing format and the alarming level of escalation of the conflict in July, the persistence of such provocations signifies further intensification of the conflict in the near future. Russia’s apparent drifting away from neutrality by arming Armenia amidst its attacks against Azerbaijan and new dynamics in the geopolitical map of the region indicate that a new military escalation might not remain limited to isolated clashes. This is, therefore, extremely important for the international community, including the United Nations and the OSCE, to pay due attention to the Armenia –Azerbaijan conflict and make a tangible contribution for the restoration of peace in the region.

(Dr. Vasif Huseynov is senior academic based in Baku, Azerbaijan)