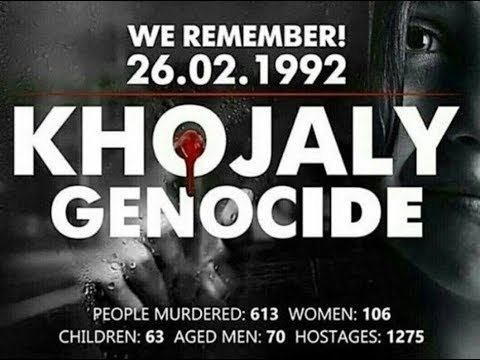 Over the night from February 25 to 26, 1992, Armenian armed forces implemented the capture of the Khojaly city with support of hard equipment and the personnel of the infantry guard’s regiment #366 of Russia.
The massed firing with using artillery weapon, hard military equipment, which was began in the evening of February 25, preceded assault of the city. Armenian armed forces with the military support of the infantry guards regiment destroyed Khojaly city and with particular brutality implemented carnage over the peaceful population.

As a result of this brutal act, 613 people were killed, among them, 63 children, 106 women, 70 the elderly.
The Khojaly genocide – the tragedy of the 20th century – was a result of this aggressive and criminal policy. The Khojaly Genocide is the most serious crimes not only against the people of Azerbaijan, but humanity as a whole.
International conventions, laws, passed in the world, criticize genocides like Khojaly tragedy and call them inadmissible. Azerbaijan nation has all legal base to bring suit against the Armenian republic in the International court of the UN, guiding by convention Convention on the Prevention and Punishment of the Crime of Genocide.
Armenian armed forces of Nagorno-Karabakh towards Khojaly peaceful inhabitants during the assault of Khojaly city also roughly violate Geneva conventions as well as the following articles of Human Rights Declaration.

The evidences of the Khojaly genocide fact and well documented by the international media and non-governmental independent resources. In its judgment of 22 April 2010, the European Court of Human Rights noted that, “it appears that the reports available from independent sources indicate that at the time of the capture of Khojaly on the night of 25 to 26 February 1992 hundreds of civilians of Azerbaijani ethnic origin were reportedly killed, wounded or taken hostage, during their attempt to flee the captured town, by Armenian fighters attacking the town”.

The crime should not remain without punishment. The world must know this crime directed not only against Azerbaijan nation, but also whole civilized world, mankind. Now, as the conflict is over and Azerbaijan’s territorial integrity is restored, it is time to bring perpetrators of the Khojaly genocide to justice. International organizations, parliaments of the world states must conduct political-legal assessment of Khojaly genocide – military crime, committed by the Armenian Republic in the Azerbaijan territories. Armenian military-political aggression must be condemned by world community.

Ramil Iskandarli
Chairman of Board
Legal Analysis and Research Public