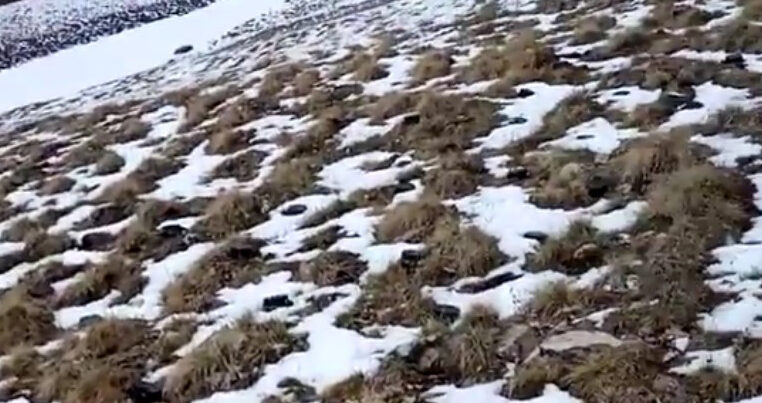 Landmines planted by Armenian forces in Azerbaijan’s Karabakh region continue to threaten the lives of civilians and military personnel, as Armenia still has not provided a map of areas contaminated by mines.

“Unfortunately, we do not see Armenia’s goodwill in this issue,” Jala Ahmadova, a member of the Azerbaijani Parliament’s human rights committee, said in an interview with Trend.

“Armenia does not want to provide a map of mined areas. As always, it demonstrates destructiveness. At the same time, the intentions of the Armenians are clear. One of them is to kill as many people as possible, and the other is to slow down the return of Azerbaijanis to the territories liberated by Azerbaijan as much as possible.”

Russian military expert Igor Korotchenko voiced similar views. He said that Armenia’s refusal to provide maps of mines placed in Azerbaijan’s formerly occupied territories demonstrates Yerevan’s unconstructive approach.
Korotchenko said that there are hundreds of square kilometres of mined areas on Azerbaijan’s liberated territories.
“Without a map, it’s difficult to ensure the safe return of peaceful Azerbaijanis who became internally-displaced persons 30 years ago. Unfortunately, we do not see the goodwill of Armenia in this matter. Armenia does not want to provide a map of mined territories as always,” Korotcheko said.

The diplomat further added that Armenia has been violating the Ottawa Treaty, which aims at eliminating anti-personnel landmines (AP-mines) around the world.

The Convention was concluded by the Diplomatic Conference on an International Total Ban on Anti-Personnel Land Mines at Oslo on 18 September 1997. One of the key principle of the Convention is the recognition that a total ban of anti-personnel mines would be an important confidence-building measure. Armenia clearly violates this principle, by not giving a map of the landmines planted in Azerbaijani territory and thus avoiding any confidence-building measures offered by Azerbaijan. (ShushaNews)

Azerbaijan’s lands have been mined heavily during their nearly 30-year-long occupation by Armenia since the early 1990s. Over 30,000 Azerbaijanis were killed and one million were expelled from those lands in a brutal ethnic cleansing policy conducted by Armenia.

Azerbaijani forces managed to liberate over 300 occupied settlements, including the cities of Jabrayil, Fuzuli, Zangilan, Gubadli and Shusha in 44-day-long counter-attack operations from September 27 through November 9, 2020. The war ended in a tripartite ceasefire statement signed by Armenia, Azerbaijan and Russia on November 9. Armenia returned the occupied Aghdam, Kalbajar and Lachin districts to Azerbaijan as part of the agreement. (Caspian News)

A large part of the liberated territories is still dangerous for both civilians and soldiers due to the landmines.

Mine clearance of the liberated lands is the number one priority for Azerbaijan, and officials in Baku are working hard to make this happen. Government officials and companies from many countries, including Turkey, the United Kingdom, the United States, and Pakistan, have already voiced their intent to help Azerbaijan in this issue.

Two Special Mine Search and Cleaning teams from Turkey numbering 135 personnel are assisting the Azerbaijani combat engineers to search and destroy the mines and handmade explosives in the liberated territories. Moreover, a total of 12 teams and 64 personnel, including three Handmade Explosive Detection and Destruction teams and nine Explosive Detection and Destruction teams of the Turkish Armed Forces are training the Azerbaijani sappers.

At the same time, twenty-three soldiers of the Azerbaijan Army successfully completed a 2-week long Specialist EOD (Explosive Ordnance Disposal) course in the Turkish city of Izmir from January 3-29. They returned to Azerbaijan earlier in February to join the mine clearing operations in the country’s Karabakh region.

Officials at the Azerbaijan National Agency for Mine Action (ANAMA) say the neutralization of unexploded ammunition, warheads, missiles in the combat zones could take 5-6 years, while it is about 10-13 years for the mined areas.(Caspian News)

“After the snow on the foothills of the Kalbajar district began to melt, such a picture opened up: hundreds, even thousands of landmines were planted by Armenian armed forces on these ancient lands of Azerbaijan. These landmines were buried literally a step away,” the Ombudsman’s Office said.

The Office called this fact another proof of Armenia’s disrespect for the norms and principles of international humanitarian law.

It reminded that numerous Azerbaijani servicemen and civilians have already lost their lives as a result of mine explosions in the liberated Azerbaijani lands.

“More than a million Azerbaijani IDPs still cannot return to their homes due to the fact that Armenia refuses to provide minefield maps. This is yet another proof of the flagrant violations of human rights by Armenia.”

The Ombudsman’s Office once again urged international organizations to pressure Armenia to hand over minefield maps to Azerbaijan.