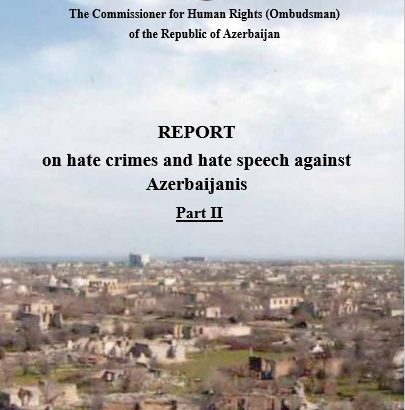 The Commissioner for Human Rights (Ombudsman) of the Republic of Azerbaijan, Ms. Sabina Aliyeva has sent to international organizations the Part II of the Report on Hate Crimes and Hate Speech against Azerbaijanis, which was released on May 4, 2021.

The purpose of the report is to inform the world community about the results of the hatred policy against Azerbaijanis in and outside of Armenia during the First and Second Karabakh Wars, as well as Tovuz battles of July 2020. It also aims to draw attention to the examples of hate speech against Azerbaijanis used by Armenians through social media platforms.

The Report was developed on the basis of the information obtained from reliable sources published on social media sites, as well as local and foreign mass media.

In her Report, the Ombudsman expresses her concern about the fate of missing persons in the First Karabakh War, disrespect for human rights and freedoms and indifference to the principle of rule of law by the Armenian political and military leadership. The Azerbaijani Ombudsman calls on international organizations and national human rights institutions to concert their efforts to put an end to such actions, which can lead to the emergence of new hotbeds of conflict.

You can see the full text of the report here.