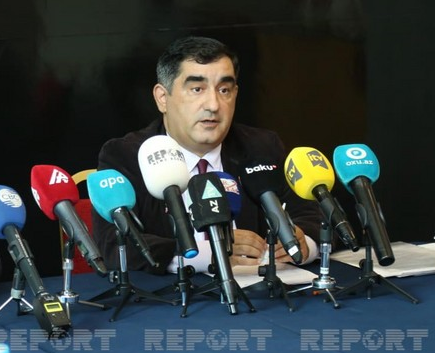 Report.az: “Legal Analysis and Research” Public Union has submitted the final Trial Observation Report to the international agencies on the trial of Armenian citizens Mkrtichyan Ludvik Mkrtichovich and Khosrovyan Alyosha Aramaisovich, who committed crimes against peace and humanity and other war crimes against Azerbaijanis in the occupied territories of Azerbaijan, from June 2 to August 2, 2021.

The report was submitted by Chairman of the Public Union Ramil Iskandarli and lawyer Fariz Akberov.

It was stated that Mkrtichyan and Alyosha Khosrovyan were charged under Articles 113 (torture), 115.2 (Infringement of laws and customs of war), 279.1 (. Creation of illegal armed formations or groups), 318.2 (illegal crossing of the state border of the Republic of Azerbaijan) and other articles of the Criminal Code. They were each sentenced to 20 years in prison for the abovementioned crimes.

The trial was open to the public and attended by many local and foreign civil society organizations, officials of the Ombudsman’s Office, media representatives, and NGOs.

The observation aimed to determine the compliance of the trial with international standards in terms of international humanitarian law and human rights, the right, and principles of a fair and impartial trial.

According to the principles of international humanitarian law and human rights, everyone has the right to a fair and transparent investigation into their case within a reasonable time by an independent and impartial tribunal established by law while determining their civil rights and obligations or making any criminal charges against them. All states must investigate war crimes allegedly committed by their citizens or armed forces or in their territories and bring them to justice. Although prisoners cannot be prosecuted just for their participation in military operations (according to the Third Geneva Convention), the country may charge them for possible war crimes.

The observers analyzed the trial, comparing it with the Geneva Conventions, the European Convention on Human Rights, and the International Covenant on Civil and Political Rights, and concluded that the court had fully complied with international fair trial standards. Thus, the following issues were provided at a high level:

– Independence and impartiality of the court, the principle of equality of arms
– Legitimate military court (Baku Military Court), equal prosecution and defense, the principle of litigation
– Informing the accused and victims about the nature and reasons of the case and explaining their rights and responsibilities
– Providing the accused person with translation
– Granting petitions of the defendants
– Providing the free participation of the accused in the courtroom
– Open trial and ensuring the participation of public representatives in compliance with the rules of the Pandemic

“As an independent NGO observer at all hearings during this process for two months, I can say that as a result of the process, we can conclude that the Azerbaijani state fully complies with international law standards for those who are guilty of war crimes committed against Azerbaijan and its citizens during the Karabakh war,” Iskandarli said.

The Report is submitted to the following organizations:

The full text of the Trial Observation Report is available here: