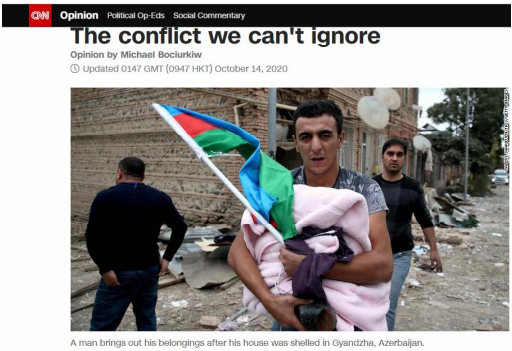 One year has passed since the first missile attack by the Armenian Armed Forces on Azerbaijan’s Gandja city during the Second Karabakh War. During the 44-days war, A total of 93 civilians, including 12 children and 27 women, were killed, 414 civilians were injured during the Second Karabakh War in Azerbaijan as a result of Armenia’s heavy artillery attacks on Azerbaijan’s densely populated areas since September 27, 2020. Armenian Armed Forces attacked Gandja five times (on October 4, 5, 8, 11, 17) with rockets and heavy artillery. As a result, 26 people were killed, 175 were injured, civilian infrastructure and vehicles in the city were severely damaged in Gandja.

On October 4, 2020, at around 10 a.m. (GMT+4), rockets fired by Armenians hit a civilian settlement in the second largest city of Azerbaijan, including a two-storey building, as well as private houses. Along with houses, civil infrastructure and ancient historical buildings were damaged. This missile attack by Armenia was the first serious attack outside the war-torn Karabakh region. Azerbaijani Prosecutor General Office initiated a criminal case under articles 100.1, 100.2 (planning, preparation, initiation or conduct of aggressive war), 116.0.1, 116.0.6, 116.0.7, 116.0.8-1 (violation of norms of international humanitarian law in the event of an armed conflict), 117.2 (giving a criminal order during an armed conflict), 120.2.1, 120.2.4, 120.2.12 (premeditated murder), 186.3 (deliberate destruction of property), 214.2.1, 214.2.3 (terrorism), 218.3 (creation of a criminal association (organization)), 279.3 (creation of armed groups not provided by law) of the Criminal Code of Azerbaijan.

Article 18 of the 1949 “Geneva Convention for the Protection of Civilian Persons in Time of War” states that under no circumstances should the parties to a conflict throw shells or artillery at civilian gatherings. The military-political leadership of the aggressor state of Armenia continues to target civilians, houses, civilian sites and settlements, and commit crimes against civilians in violation of all international norms and principles, in gross violation of its obligations under the Geneva Conventions. Population centers, district and village centers, civil infrastructure facilities, hospitals, medical centers, school buildings and kindergartens are targeted deliberately.

The bombing of the Gandja, the city with a population of more than 500,000 people situated far from the conflict zone, without any military necessity by the Armenian political-military leadership, the deliberate and indiscriminate use of powerful destructive missiles such as SCUDs to kill innocent civilians will be included in the history books as the bloodiest war crime committed against humanity in the XXI century.

Women and children victims of the Gandja bombings

According to the Chairman of the Legal Analysis and Research Public Union, Ramil Iskandarli, “If we talk about the children and women, during the 44-days war, 12 children and 27 women, were killed in Azerbaijan. International humanitarian law provides general protection for children and women as persons taking no part in hostilities, and special protection for persons who are particularly vulnerable. Protocol II of 1977 of the Geneva Convention also codifies the principles according to which the civilian population as such, as well as individual civilians, shall not be the object of attack. The Fourth Geneva Convention comprises a great many provisions in favor of children. Armenia has violated the principles stipulated by the Declaration on the Protection of Women and Children in Emergency and Armed Conflict and which calls for the strict observance of the Declaration by all Member States. Attacks and bombings on the civilian population, inflicting incalculable suffering, especially on women and children, who are the most vulnerable members of the population, shall be prohibited, and such acts shall be condemned”.

The Declaration on the Protection of Women and Children in Emergency and Armed Conflict calls for the strict observance of the Declaration by all Member States, i.e. attacks and bombings on the civilian population, inflicting incalculable suffering, especially on women and children, who are the most vulnerable members of the population,
shall be prohibited, and such acts shall be condemned. All States shall abide fully by their obligations under the Geneva Protocol of 1925 and the Geneva Conventions of 1949, as well as other instruments of international law relative to respect for human rights in armed conflicts, which offer important guarantees for the protection of women and children.

Women and children belonging to the civilian population and finding themselves in circumstances of emergency and armed conflict in the struggle for peace, self-determination, national liberation and independence, or who live in occupied territories, shall not be deprived of shelter, food, medical aid or other inalienable rights, in accordance with the provisions of the Universal Declaration of Human Rights, the International Covenant on Civil and Political Rights,
the International Covenant on Economic, Social and Cultural Rights, the Declaration of the Rights of the Child or other instruments of international law. Unfortunately, this does not mean that the international community properly reacted to Armenia’s actions.

The appeal of NGOs to the international organizations

On September 3th, 2021, a conference organized by the Agency for State Support of Non-Governmental Organizations of the Republic of Azerbaijan was held in Gandja, Trend reports.

The conference, held at the Heydar Aliyev Center, was attended by about 100 representatives of NGOs who appealed to the world community in connection with the war crimes committed by Armenia in Gandja and other regions of Azerbaijan.

“As a result of the successful military operations conducted by the Azerbaijani army under the leadership of the President, Supreme Commander Ilham Aliyev, the Armenian armed forces were virtually destroyed. The Armenian government, in order to compensate for the defeat on the battlefield, targeted civilians living far from the war zone. As a result of the attacks undertaken, including the use of various heavy military equipment (artillery and ballistic missiles), civilians, including women and children, were brutally killed, and serious damage was caused to the infrastructure and property of citizens.

Thus, the second largest city of Azerbaijan, Gandja, came under rocket fire on October 4, 5, 8, 11 and 17. As a result of this horrific terrorist attack, 26 people were killed and 175 were injured. Civilian infrastructure and vehicles suffered enormous damage. Another terrorist attack was committed in the Barda region – 29 people were killed, 112 people were injured, and various objects were destroyed. By order of the Armenian leadership, attacks from ballistic missiles and other artillery were carried out at Yevlakh, Beylagan, Terter, Gabala, Goranboy, Agjebedi, Khizi and other cities and regions. ” – the appeal said.

NGOs operating in Azerbaijan call on human rights organizations, NGOs, media representatives, members of parliament, and governments around the world to protest against the war crimes committed by Armenia against the civilian population of Azerbaijan and to strongly condemn these crimes.