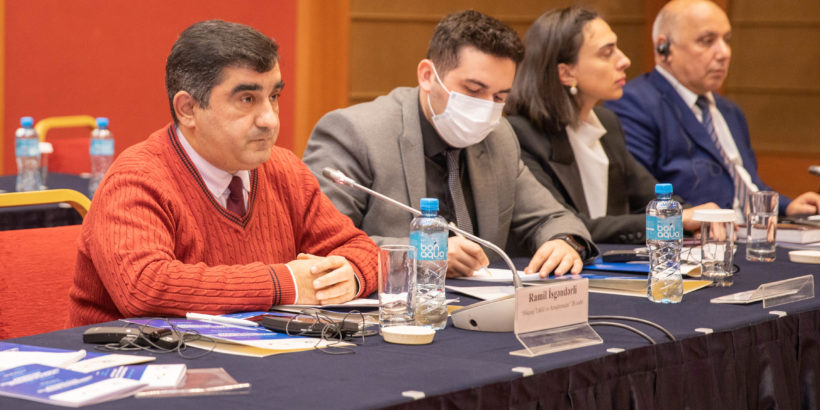 The Office of the Commissioner for Human Rights (Ombudsman) of Azerbaijan and the German Agency for International Cooperation (GIZ) organized a round table on “The role of the Ombudsman and Civil Society Organizations in Promoting Good Governance”. The hybrid event was dedicated to December 10 – International Human Rights Dayand brought together the representatives of government agencies, courts, civil society organizations (CSOs), international organizations, embassies, and foreign ombudsman institutions.

Then Mr. Nazim Rajabov, Chief of the General Office for Combating Corruption under the Prosecutor General, Mr. Khagani Mammadov, Chairman of the Administrative Board of the Supreme Court, Mr. Orkhan Gasimov, Deputy Chief of the Penitentiary Service, Mr. Zaur Valimammadli, Head of the Department for Cooperation with International and Civil Society Organizations at the Ombudsman Office, Mr. Fariz Jafarov, Director of e-Government Center, Mr. Ramil Iskandarli, Chairman of the Legal Analysis and Research Public Union reported on the subject as well.

During the roundtable, Ombudsman of Turkey Ms. Fatma Benli Yalchin , Ombudsman of Morocco Mr. Mohamed Benalilou, and Mr. Stefano Valenti, Head of Unit at the CoE Anti-Discrimination Department joined the event through videoconferencing.

In her opening speech, the Ombudsman of Azerbaijan Ms. Sabina Aliyeva greeted the guests and stressed the importance of cooperation between national human rights institutions and CSOs.

Noting that the event is dedicated to International Human Rights Day, the Ombudsman stressed that the victory in the patriotic war has already laid the groundwork for ensuring the fundamental human rights of our IDPs.

Ramil Iskandarli in his speech talked about the international and national legal framework on the public participation in a decision-making process and the current status of the implementation of the Law on Public Participation in Azerbaijan and participation of the CSOs, in the work of Public Councils, and the need to enhance participation of NGOs, Media, Trade Unions, Public Initiative Groups, CBOs and Professional Associations) in public hearings, public discussions, and conducting public opinion surveys.

The results of the joint training seminars on the promotion of good governance addressing relevant state bodies and CSOs launched in the framework of the cooperation between the Ombudsman and GIZ and conducted by the expert-trainers of the Ombudsman Office in Guba, Sheki, Lankaran, and Ganja regions were also discussed at the event.