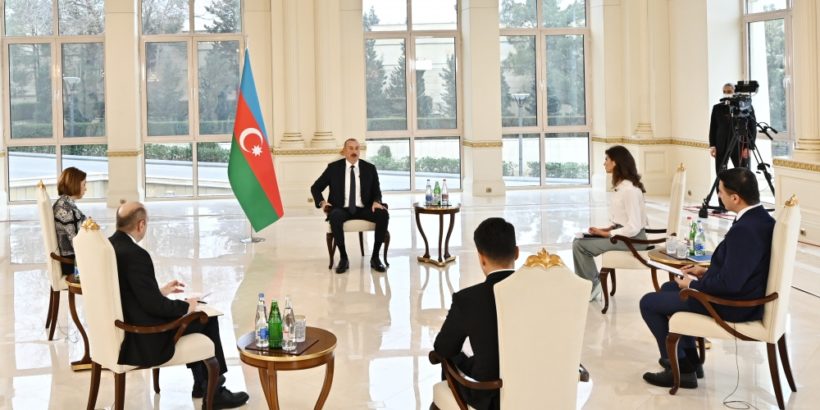 President of the Republic of Azerbaijan Ilham Aliyev has yesterday been interviewed by local TV channels.

İn the interview, the head of state responded to journalists’ questions about the work done in Azerbaijan in the economic and social spheres in 2021, relations between Azerbaijan and Armenia, reconstruction work carried out in the liberated territories, as well as the country’s foreign policy and other issues. He also talked about the fight against corruption, accountability, public oversight, and public participation in the decision-making process.

President Aliyev mentioned the following on the issue:

“The fight against corruption phenomena will be continued this year. I think that the unity between the determination we have shown, the words and deeds in recent years should be a lesson for everyone. Because I have repeatedly instructed government officials, both officially and during meetings when appointing them to office, that corruption and bribery must be seriously combated, and if government officials tarnish themselves, the punishment will be very severe. The result shows that the highest-level officials have been accountable by investigating authorities and courts and received their punishment they deserve. I want to say again that no-one can evade this responsibility, no-one is above the law, everyone is equal before the law and no-one’s previous services will be taken into account. Therefore, I think that everyone has already seen and knows this. Therefore, our steps will be very severe. Our punishment will be very severe.

But this is only one side of the issue. I have been working as President for 18 years and many personnel changes have been made to my initiative. Unfortunately, in some cases, personnel changes do not lead to a positive change in the situation. When new staff is appointed, they act in accordance with the instructions for a certain period of time, but then, over time, as they say, they go the old crooked way. Therefore, along with punitive measures, the issue of proper selection of personnel should play a role here.

The Azerbaijani public has recently seen very serious personnel reforms in this area. Serious personnel reforms have been carried out in almost all branches of the government. The government, the Milli Majlis, the Presidential Administration, ministries and local executive authorities have already undergone significant personnel changes, and I believe that this will play an important role in the fight against corruption.

At the same time, we must create an atmosphere in society that would strengthen public oversight. You know perfectly well that I have repeatedly expressed my views on this issue, and not just for the sake of saying it. Because if this were the case, I would say it only once. I always say this, I appeal to our citizens not to remain indifferent and exercise control. Public oversight will deter many officials from engaging in such criminal activities. Therefore, some institutional format of public oversight needs to be developed. You, the media, have a great role in this area. I can say that I sometimes learn about an unpleasant situation from you. I get this news from you and react immediately. I can say that the information provided in the media is in many cases confirmed. There is also biased information but the vast majority of it is confirmed and measures are taken immediately. Therefore, government officials should know that their work is monitored not only by the Presidential Administration but also by the public and the media.

I think that one of the important factors is to narrow the field for corruption. Here, of course, institutional measures must be taken, additional steps must be taken in terms of transparency and accountability. To put it simply, the ASAN model should be applied to all areas. Because the ASAN model has already stood the test of time. It was also our initiative. There had been no such service area of such scale and scope before us. We have done it. We have managed to do it. Therefore, the approval rating of ASAN service is about 98 percent, perhaps even more. I am actually wondering why it is not at 100 percent. There is a completely transparent picture there. Therefore, this model should be applied to all areas – economic, social, government-citizen relations. Government-citizen contacts, i.e. the area where there are opportunities for corruption, should be minimized. If this is the case, the success will be even more impressive. But I think that our political resolve is already obvious to everyone. I said earlier that if government official does not want to find themselves behind bars and can’t give up their ugly deeds, they should resign of their own accord so as not to ruin their lives.