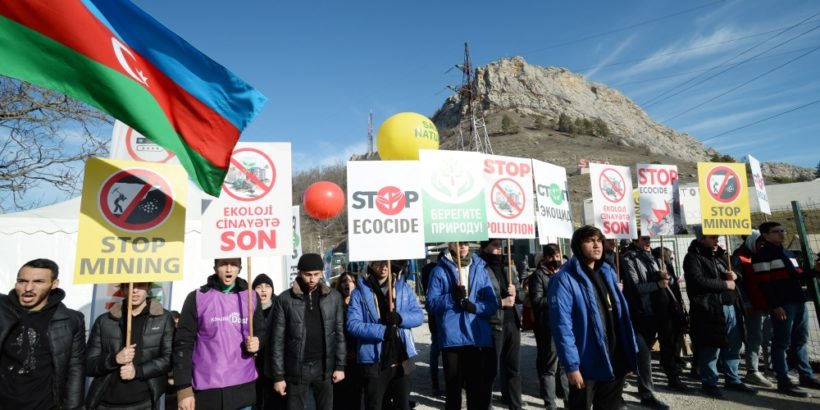 Today, more than 100 NGOs of Azerbaijan made a statement regarding the illegal exploitation of the natural resources and environmental terrorism in the territories of Azerbaijan.

The text of the Statement is as follows:

“We, representatives of non-governmental organizations, hereby express our deep regret over the fact that certain states have given a lop-sided and biased assessment to the peaceful protest action against the illegal exploitation of natural resources and environmental terrorism being committed in the territories of the Republic of Azerbaijan where the Russian peacekeeping contingent is temporarily stationed at a UN Security Council meeting on 20 December 2022, and the fact that discussions held there do not reflect the actual situation on the ground.

The fact that Armenia and France, a permanent member of the UN Security Council, have unilaterally abused this platform in an effort to mislead the international community and to engage in dirty propaganda is unacceptable. Undesirable attempts of this nature do nothing to achieve a lasting peace in the region, but rather aggravate the
situation even further. Armenia, the criminal dealers in Karabakh and a number of war criminals are deliberately turning the local population into hostages of their policies, preventing their contacts with the Azerbaijani side and trying to create an atmosphere of an artificial “humanitarian catastrophe”. It is also unacceptable for Armenia to make completely unfounded claims for the sovereign territories of Azerbaijan in the UN Security Council, and such an approach runs counter to the fundamental principles of the Security Council. We reiterate that the protest action is of peaceful nature, as representatives of the civil society call for an end to the plundering of Azerbaijan’s natural resources and to the irreparable damage being caused to the environment. We view the disregard for our legitimate concerns in the discussions at the UN Security Council as a manifestation of disrespect, prejudice and a selective approach to civil society.

We would like to emphasize with regret that the UN Security Council as the main body responsible for the protection of peace and security around the world turned a blind eye to the 30 years of Armenia’s occupation of Azerbaijani territories, to the policy of ethnic cleansing, to the Khojaly genocide, to the expulsion of more than a million Azerbaijanis from their homes, to the deliberate and consistent destruction of the cultural heritage of the Azerbaijani people, to destruction and looting, to the policy of illegal settlement, and did not take any steps to enforce the implementation of its own resolutions. It is unfortunate that the UN Security Council has become a hostage of double standards. It is obvious from the information provided by the media and individual social network users from the ground that humanitarian cargo, passenger vehicles, ambulance and other humanitarian vehicles can move freely along the road and participants in the protest action have created all conditions for that. In addition, a hotline has been established by NGOs for a prompt resolution of the humanitarian problems of Armenian residents living in the Karabakh region of our country. Therefore, any claims that residents of Armenian origin are allegedly in a “blockade” are completely groundless. As participants of the protest action, we demand an end to the use of the Lachin road for military purposes and to the looting of Azerbaijan’s natural resources. The Lachin-Shusha-Khankandi road is the sovereign territory of the Republic of Azerbaijan.

We also vehemently condemn the attempts of the Armenian government and Armenian illegal armed units in the territories of Azerbaijan where the Russian peacekeeping contingent is temporarily stationed to intimidate residents of Armenian descent and prevent their reintegration into Azerbaijan. We call on the residents of Armenian origin to live together. As representatives of civil society, we once again declare that our readiness to mobilize our resources to eliminate any humanitarian problems of our citizens of Armenian origin living in Karabakh may have.”

The statement was adopted by the following NGOs: