Daily Sabah: Azerbaijan’s President Ilham Aliyev on Tuesday received a Turkish delegation led by the deputy chair of the Nationalist Movement Party (MHP) in the capital Baku to evaluate the party’s project to build a school in a territory recently liberated from the Armenian occupation.

According to the statement released by Azerbaijan’s Presidency, Karakaya congratulated Aliyev for the victory in the recent Karabakh War, in which Azerbaijan liberated several towns and nearly 300 settlements and villages from the occupation.

About 20% of Azerbaijan’s territory had been under illegal Armenian occupation for nearly three decades. In the most recent conflict that began on Sept. 27, Azerbaijan took back much of the land in and around the Nagorno-Karabakh enclave that it lost in a 1991-1994 war that killed an estimated 30,000 people and forced many more from their homes.

Karakaya also informed Aliyev about their initiative to build a culture and arts school in the recently liberated town of Shusha and briefed him about their recent contacts with Azerbaijani authorities.

Bahçeli had announced the intent to build the school on Jan. 16 with a post on social media saying that the party would like to establish a school with nine classrooms if President Recep Tayyip Erdoğan allows.

The Azerbaijani armed forces liberated Shusha in November after 28 years of the Armenian occupation. Shusha, known as the pearl of Nagorno-Karabakh, was occupied by Armenia on May 8, 1992. The town has a significant military value since it is located on strategic heights about 10 kilometers (6 miles) south of the region’s capital over Khankendi (Stepanakert) and on the road linking the city with Armenian territory. Besides its strategic significance, the town is known as a symbol of Azerbaijani history and culture with many historic sites, the restoration of which has started. Many prominent Azerbaijani musicians and scholars were born in the city.

Aliyev thanked the delegation and conveyed his greetings to Bahçeli. Reminding that Turkey and Erdoğan have always provided great support to Azerbaijan in their fight to rescue Azerbaijani territories from the occupation, Aliyev said that Bahçeli’s remarks on the issue also have political and moral importance.

Thanking for the school initiative, Aliyev said that it will be taken under consideration in line with the reconstruction efforts in the liberated territories.

He also added that he will give necessary instructions to find a proper location for the building of the school.
Daily Sabah 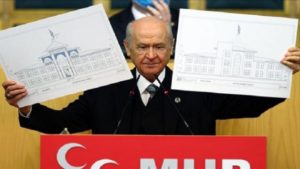