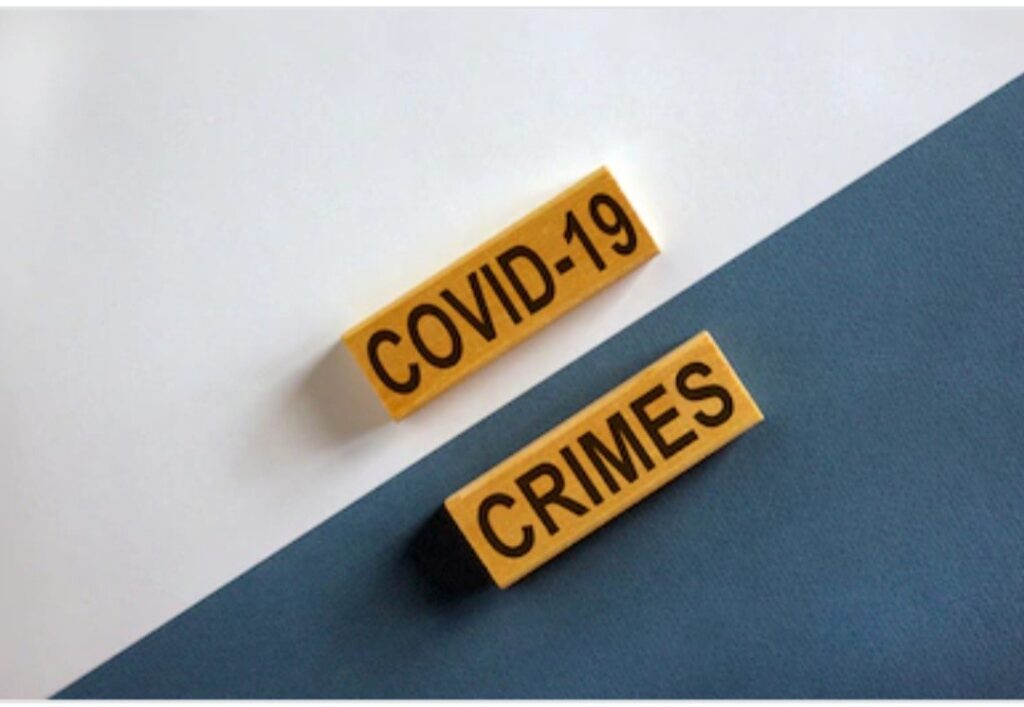 The COVID-19 pandemic has a strong impact on all social processes in society, including crime, and in this regard, strict quarantine measures have worsened the lives of millions of people around the world. Against this background, a positive global trend is that, according to research, crime is generally declining everywhere.

Experiences of different countries
According to the general statistics of crimes from the end of March to the end of May 2020, according to the data released by the police offices of different countries, a decrease is visible. In the UK, where quarantine has been in place since March 23, street crime rates were down 21% in comparison with a year earlier, with several robberies reported in March. In March, Italy committed 67% fewer crimes than in the same period in 2019. In particular, the number of robberies in pharmacies decreased (28.2%). During quarantine, the number of murders decreased by 71%, and the number of thefts and rapes decreased by 72%. The number of drug-related crimes decreased by 46%. At the same time, the level of debt-related crimes increased ( 9.1%). The same trend was observed in Spain. In France, crime fell by an average of 45% in March for most indicators due to quarantine restrictions. In some countries, the situation seemed very unusual: the crime rate in El Salvador fell 300 times, in South Africa – 6 times, and in March in Peru, crime fell by 84%. Some studies have tried to explain this trend, and the following factors are listed as several main reasons:
– Isolation of people at home,
– more policemen on the streets

The situation in Azerbaijan

As for Azerbaijan, in general, less crimes were committed during the quarantine period than in previous period. According to our observations and information from the Press servilce of the Ministry of Internal Affairs, and the daily “Criminal Chronicle” posted on the official website of the Ministry of Internal Affairs, there are fewer crimes committed during quarantine than in the same period of last year. Thus, according to the press service of the Ministry of Internal Affairs of Azerbaijan, in comparison with the same period of last year, the number of crimes decreased. Thus, 6 intentional homicides, 16.3 attempted murders, 4.2 intentional infliction of minor body harm, 4.8 crimes against property, 27 hooliganism, 19.6 juvenile crimes, 2 crimes with firearms decreased by 33.3 percent, crimes committed in public places by 21.5 percent, traffic accidents by 7.5 percent, deaths by 5 percent and injuries by 6 percent. Together with the prosecutor’s office, 241 crimes were solved and 1,821 wanted people were detained during the reporting period. It should be noted that the police are also working tirelessly to prevent violations of the rules of the anti-epidemic regime. This was possible due to the fact that law enforcement officers did their best to ensure the safety and order of citizens by fulfilling their duties.

“Difficulties and opportunities” for criminals

Researches shows that the more police officers are on the streets during a pandemic, the less crime is committed. As a result, burglary and pickpocketing, robbery and burglary, and car thefts have declined in alll over the world. Maintaining the distance in the subway and public transport has made the work of pickpockets much more difficult. Due to the small number of people on the street, street robbery has also been reduced to a minimum. The closure of bars and restaurants during quarantine in most countries has reduced the number of alcohol-related crimes. It was also very difficult for shoplifters. So many shops were closed and only a limited number of people were allowed in supermarkets, keeping the distance.
The sharp decline in passenger traffic and the number of intercity trains has created difficulties for drug trafficking gangs. Strengthening border controls around the world during the pandemic has reduced smuggling. On ordinary days, the couriers did not attract attention in the crowd, but they were immediately visible in the quarantine. In addition, the perpetrators are human beings who do not want to risk their lives by contracting the coronavirus, preferring to be isolated, look around and develop a new “work” strategy.
Europol analysts say that in many cases, criminals are looking for opportunities to take advantage of the crisis. They skillfully take advantage of the pandemic’s growing demand for medical products, the limited mobility of citizens, the large number of people staying and working at home, the limited socialization of people, and the growing anxiety and fear of the pandemic. The underground world prefers to live by new rules.

Crimes that increased in pandemic times

According to the data provided by EU and Europol member countries and the experience of other countries, there are four main types of crimes that increase during a pandemic: domestic violence, theft, cybercrime and the production and sale of counterfeit products.

In all countries of the world, there is a significant increase in cases of “domestic” crimes and domestic violence, which, of course, is due to the inevitable stress caused by people staying on the four walls day and night. This issue remains a problem in Azerbaijan as well. The State Committee for Family, Women and Children’s Affairs reported on the impact of the COVID-19 pandemic on the increase in domestic violence: “Gender-based violence is on the rise in any crisis, including pandemics, and more women and girls are suffering. Studies also show that most women are exposed to the violence of people they know. An analysis of data collected by the State Committee for Family, Women and Children’s Affairs’ Domestic Violence Data Bank of Azerbaijan shows that the perpetrators of violence against women are mostly their spouses, which is 68.4%. 12.1% of women are abused by their ex-husbands, and 11.9% by men who live in civil marriage.
Although accurate statistics are not available in all countries, it is known that domestic violence has increased by 20 percent in Catalonia, Spain, 30 percent in Cyprus and 50 percent in Brazil. In China, 90 percent of domestic violence is between isolated couples. It is also noted that isolation measures in Italy, France, Germany, Turkey, India and other countries have had a significant impact on domestic violence.

Studies show that if the general quarantine period lasts too long and people lose their sources of income, it can lead to an increase in the number of thefts, robberies and burglaries, in addition to the classic criminals, by or with the participation of law-abiding citizens.
On June 14, Absheron resident J.Ibrahimov was detained by Binagadi District Police Office’s 6th Police Department for violating special quarantine rules in a Daewoo car. According to the press service of the Ministry of Internal Affairs (MIA), during a personal search, methamphetamine was found in him. During the inspection of the car’s cargo area, police officers found and confiscated 2 boilers, a water heater, 3 tape recorders, a monitor, 4 mobile phones and a kitchen knife stolen from houses and cars in Yasamal district.

At the same time, Europol is concerned about the increase in cybercrime – the use of computer technology and the Internet. This problem has really reached its peak today. Almost all over the world, the risks of cyber-interference in criminal systems with huge financial and material resources are increasing. Cybercrime came to the fore during the pandemic.
During the pandemic, an increasing number of citizens are using e-commerce services to order food and medicines online. Therefore, on the one hand, criminals will try to access or even control the delivery network, on the other hand, using cybercrime tools, a large number of fake online stores and so on. Such criminals are intensifying their activities, primarily related to the production and trade of drugs, as well as the sale of counterfeit devices for testing coronavirus, mechanical ventilation devices (IVL). Cybercriminals exploit online trading platforms – for example, selling non-existent hand cleaners, fake masks and respirators, and fictitious pharmaceuticals. It is known that in Italy, Spain and Portugal, high-tech organized crime groups have placed stores on the Internet where such products can be purchased.
In April, the Interior Ministry’s press service told AZERTAC that Bulgarian citizens Stoychev Marian Nikolov, accused of committing cybercrimes against the banking sector during the last such operation carried out by officers of the Interior Ministry’s Main Department for Combating Organized Crime, told AZERTAC. and Mladenov Vladislav Tsvetanov were detained in Baku. The investigation revealed that the above-mentioned persons interfered with ATMs belonging to various banks in the capital through special devices used in cybercrime, as well as chips and other equipment.
It should be noted that all the trajectories of Marian Stoychev and Vladislav Mladenov in the capital, the ATMs they interfered with and the scope of their contacts were thoroughly investigated at the Main Police Department. According to Articles 272.3, 177.2.3-1 and 177.2.1 of the Criminal Code of the Republic of Azerbaijan (theft committed by a group of persons in collusion with the use of electronic data carriers and information technology, illegal seizure of computer data) a criminal case had been launched.

The sale of counterfeit medical, pharmaceutical and sanitary products, as well as personal protective equipment, has increased and continues to grow in Europe since the beginning of the pandemic. A total of 37,000 counterfeit and non-standard surgical masks, tests for individual analysis for AIDS, coronavirus and glucose, and 13 million drugs were confiscated as a result of the Pangea operation, which involved 90 countries from March 1 to 10 this year. As a result, 121 people were detained and 37 organized criminal groups ceased their activities.
Cause and effect
From a socio-psychological point of view, the reason for many crimes during the pandemic is the psychological stress of the population, which has been isolated for a long time. A number of crimes can also take place against the background of the erosion of moral values. If moral values are more important in society, we will encounter fewer offenses. In a society where moral values take precedence and materialist values take precedence, everything can be expected.
Finally, there is the question of whether crimerate will increase in the post-pandemic period. Millions of people around the world lose their jobs every day, leading to a significant reduction in income. However, criminological research shows that the general level of welfare of the population is not always directly related to the level of crime in terms of cause and effect. In Lazkin’s practice, this is not the case in several cases. For instance, the trend of declining crime in industrialized countries began in the 1980s and continued in the year of the global economic crisis (2008).
Azerbaijan is the country with the lowest crime rate in Eastern Europe and the CIS. We would like to express our confidence that as a result of the tireless work and courage of the Azerbaijani police, safety and security of citizens, social stability will continue to be ensured in the post-pandemic period, as a result of proper maintaining public order and successfully combating crime.

Note: This study was conducted by the Public Union “Legal Analysis and Research”. Information from the Interior Ministry’s Press Service, media reports, information from the State Committee for Family, Women and Children, articles and research of other countries experineces were used.