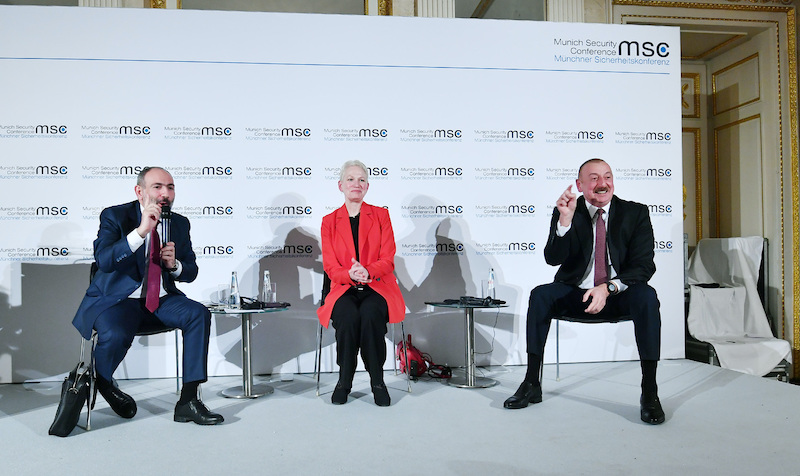 By Robert Horowitz The USA Tribune

From history lessons and European literature, we have come to know the importance of dueling, practiced by the disgruntled men in early modern Europe to defend their honor and dignity. As a form of exposition dueling has found home in many cultures, extending as far as the Wild West. So, make no mistake – it’s been an international sport for many centuries.

In the world today, dueling has found home in international relations, albeit with verbal exchanges rather than arms, which in itself could be a lot more powerful. Think about it for a minute. What comes out of a mouth of a leader can solidify or loosen an argument before the international audiences. That’s exactly why, international media chases all and every leaders in an effort to catch those verbal expressions that potentially change the course of history.

Main venues for verbal duels in modern world are the United Nations Security Council, General Assembly, Davos Forum, Munich Security Conference and other forums where leaders regularly appear to exercise their sabre rattling. Munich Security Conference, for instance, is an annual conference on international security policy held in Munich for the last six decades, where many issues pertaining to international affairs and security are debated. With social media breaking all possible boundaries of information containment, this annual gathering has become a must-attend forum for many, if not all leaders of states, seeking to consolidate their international positions and standings on issues.

This year’s security conference which took place on February 14-16 was remarkable for the people of former Soviet Union because security issues, and specifically protracted conflicts were at the fore of the discussions.

One of the most remarkable events that took place within the sidelines of the conference was the discussion on “New developments in Nagorno Karabakh conflict” with leaders of Armenia and Azerbaijan took the stage to debate the three-decade conflict in South Caucasus.

The leaders of the parties who had found themselves in a negotiations deadlock in the past year, were there to speak out why this conflict was nowhere close to be resolved. The moderator skillfully handled the verbal duel allowing the Armenian Prime Minister Nikol Pashinyan and Azerbaijani President Ilham Aliyev to lay out the facts, as they saw it.
The leaders went many years and centuries back to justify their sovereignty over Karabakh region. The Armenian leader went round and round reiterating an already exhausted argument that Armenians were allegedly the indigenous habitants of South Caucasus and that Karabakh was part of historical Armenia. The Azerbaijani leader, certainly, rebuked the claim, by presenting the Azerbaijani version of the history.

Pashinyan’s main argument, as far as history is concerned, was that Nagorno Karabakh was initially given to Armenia in 1921 by the Kavburo (Caucasian Bureau of the Communist Party) but then the decision was reversed by none other than Joseph Stalin who allegedly conspired with Lenin and Ataturk and “gave” Karabakh to Azerbaijan. This, however, flies in the face of history, as this allegation is certainly misrepresented. The Kavburo, which had more ethnic Armenian members than Azeris, indeed, decided to give the mountainous part of Karabakh to Armenia, but then reversed the decision on July 5, 1921 after considering that Karabakh has more ties with Azerbaijan than with Armenia. The actual text of the ruling uses the word “retain” in relation to Azerbaijan: “As a necessity in bringing interethnic peace between Muslims and Armenians, taking in consideration the economic bond between Upper and Lower Karabakh, its permanent ties with Azerbaijan, Upper Karabakh shall be retained within A.S.S.R (Azerbaijan Soviet Socialist Republic), having been given a wide oblast autonomy with an administrative center in the town of Shusha, located within autonomous oblast itself.” This surely means that Karabakh was part of Azerbaijan already, and Kavburo decided to retain it within Azerbaijan rather than transfer it to Armenia.

In his statement rebuking Pashinyan, that’s what Aliyev referred to asking the audience to search and verify these facts themselves if they so liked by going to Internet.

Pashinyan then went on to discuss international law, which by many observers would agree, he knows nothing about. He claimed that if Azerbaijan respected territorial integrity of the Soviet Union, it wouldn’t become an independent state and if it did, it should respect Nagorno Karabakh’s right to its own self-determination because as per the Prime Minister, Nagorno Karabakh Armenians exercised the same right as Azerbaijanis and broke up from Soviet Union. The Prime Minister, however, lacks the proper knowledge of international law to understand that Nagorno Karabakh was a constituent part of Azerbaijan SSR and under Soviet Constitutions, any move to secede from the republic, it would have to conform with both the Constitution of Azerbaijan SSR and the Soviet Constitution. That is, Azerbaijani and Soviet legislatures would have had to approve the move to transfer or detach Nagorno Karabakh from Azerbaijan for it to be able to become independent or part of Armenia. Neither happened: Soviet parliament and Azerbaijani parliament both rejected the move. Aliyev repeatedly stated that what Pashinyan said was simply untrue and did not hold water.

Pashinyan also made a poor choice by going into discussion around the four UN Security Council resolutions on Nagorno Karabakh claiming that UN SC had allegedly asked to immediately and unconditionally institute ceasefire.

In fact, as the Azerbaijani leader said, the UN SC resolutions 822, 853, 874 and 884, actually, demand Armenian troops to cease their military offensive and demand their immediate and unconditional withdrawal from occupied territories of Azerbaijan, as well as asks to allow the return of all internally displaced persons into their lands.

Aliyev asked the international community, and the OSCE Minsk Group specifically to increase pressure on the Armenian government to abandon its unconstructive stance and start real negotiations. “The OSCE Minsk Group co-chairs should explain to Armenia that Nagorno-Karabakh is not Armenia. No country recognized Nagorno-Karabakh,” said Azerbaijani President.
Pashinyan told the audience that Armenia wants Nagorno Karabakh authorities to join the negotiations to represent themselves. Pashinyan even went as far as calling his proposal a “micro revolution” as if this was something new. In fact, attempt to draw in Nagorno Karabakh authorities into the negotiation has been Armenia’s long term policy for over 20 years. Azerbaijan, however, rejects the three-party format simply because the very negotiation format is based on the formula of two principal parties to the conflict (Armenia and Azerbaijan) and two interested parties (Armenian and Azerbaijani communities of Nagorno Karabakh region). Azerbaijan says that Karabakh Armenian authorities who have been installed by official Yerevan in Khankendi (Stepanakert) have no legitimacy as they ethnically cleansed the Azerbaijani community of Karabakh during the war.

Aliyev continued: “…all Armenian leaders tried differently to hold the status quo. Azerbaijani IDPs should return back to their territories. More than 80% of armed forces in the occupied lands are Armenian soldiers. They think that they can keep these territories forever. Never”.

Either by happenstance or by merely not realizing his mistakes, Pashinyan confirmed that servicemen of Armenian armed forces serve in the occupied territories of Azerbaijan. The Armenian Prime Minister openly stated that his own son serves in Nagorno Karabakh, effectively dismantling the Armenian propaganda that Karabakh Armenians are enforcing their security on their own, through the “self-defense army” they had established.

In response to questions from the moderator on the ways to resolve the conflict, Aliyev said: “We need to resolve this conflict in phases, liberation of part of territories and return of IDPs. Status of Nagorno-Karabakh can be defined later. Status must not interfere with the territorial integrity of Azerbaijan. All Azerbaijanis are ethnically cleansed from the occupied lands, from Shusha. Armenians destroyed our cultural heritage in the seized lands. There is no historical heritage of Armenia in Nagorno-Karabakh.”

Rebuking Pashinyan’s claims to Karabakh, Aliyev said at the end of his remarks that “Nagorno-Karabakh is part of Azerbaijan and territorial integrity of Azerbaijan is recognized by the whole international community.” He said that the Armenian people have self-determined themselves already by proclaiming independence of Republic of Armenia in 1991. Aliyev suggested that if they wanted to self-determine for the second time, they should do so elsewhere on Earth, not in Azerbaijan.

Verbal dueling might not have ended well for Pashinyan, as he took some serious wounds from Aliyev’s statements and suffered immensely by his own lack of ability to make proper fact-based arguments.

Nagorno Karabakh region and seven adjacent districts of Azerbaijan fell under the military control of Armenian forces in 1992-1994 after a brutal war that killed over 30,000 people on both sides. No country or international organization recognizes Nagorno Karabakh as an independent states or Armenia’s sovereignty over it. The negotiations have continued under the OSCE Minsk format but the resolution is nowhere to be seen.