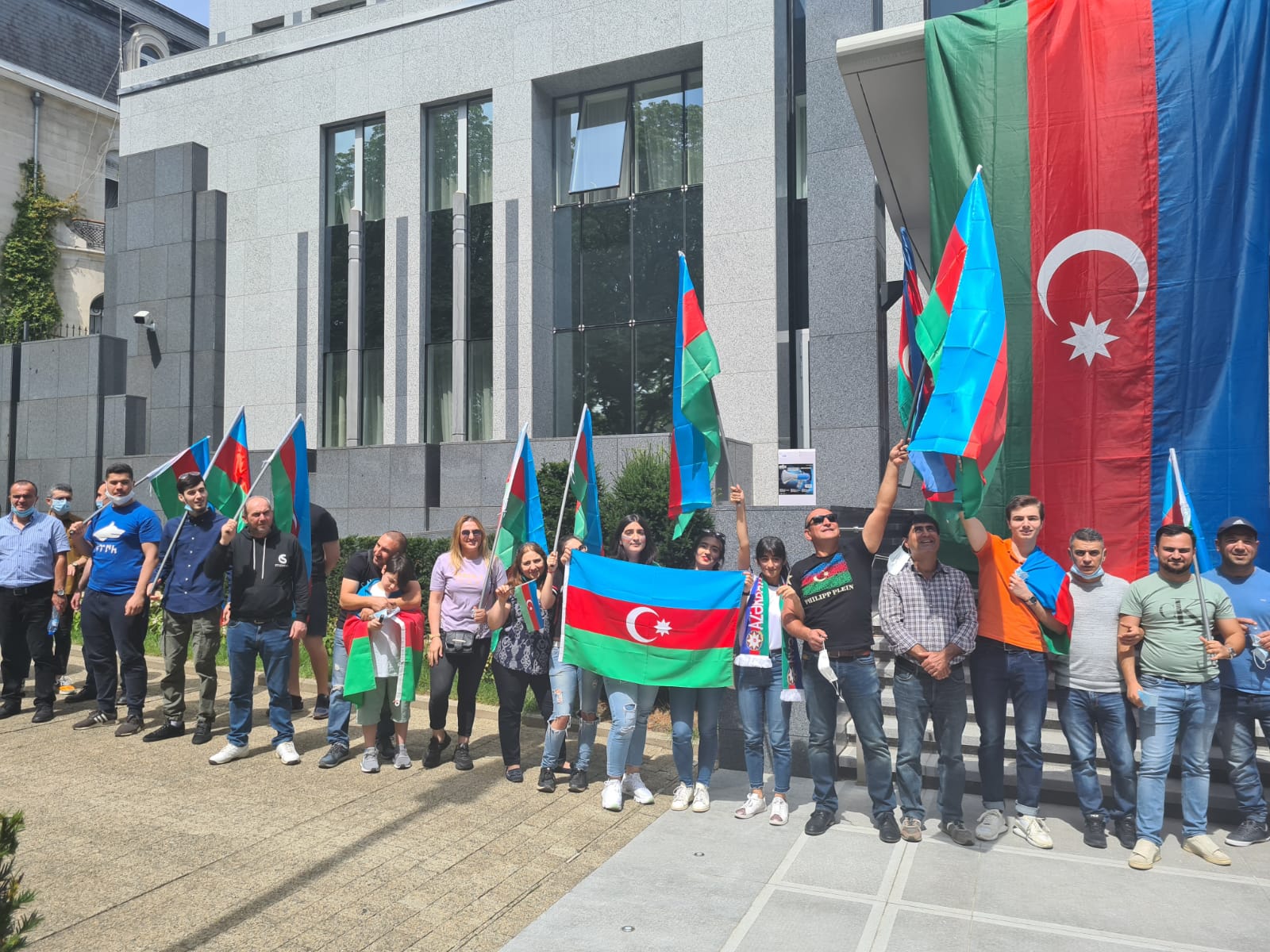 Statement of the Embassy of the Republic of Azerbaijan in the Kingdom of Belgium and the Grand Duchy of Luxembourg, Mission to the European Union dated 23.07.2020

Guided by the Statement of the Ministry of Foreign Affairs of the Republic of Azerbaijan dated July 23, 2020.

The defeated and helpless Armenian Diaspora is trying to carry out terrorist attacks against the diplomatic missions of the Republic of Azerbaijan in a number of countries around the world amid in the military clashes, launched by the occupying Armenian forces on July 12 in the direction of Tovuz on the Azerbaijani-Armenian border.

Extremely aggressive provocations, acts of aggression and vandalism are being committed by radical Armenian forces towards members of the peaceful Azerbaijani community abroad protesting against Armenia’s military provocations.

In this regard, a mass demonstration was held in front of the Embassy of the Republic of Azerbaijan in the Kingdom of Belgium and the Grand Duchy of Luxembourg, Mission to the European Union by the Armenian Diaspora in Belgium (Comité des Arméniens de Belgique) on July 22, 2020, accompanied by acts of vandalism.

Hundreds of Azerbaijani community members living in Belgium and Luxembourg, including our elderly and courageous women, as well as our compatriots living in the neighboring Netherlands, France and Germany, gathered in the diplomatic mission to defend the interests of our state and people.

Our compatriots, proudly united under the auspices of the glorious flag of Azerbaijan, have become a shield in defense of our statehood.

They chanted slogans and displayed posters, exposing the military provocations committed by the Armenian forces in the direction of Tovuz on the Azerbaijani-Armenian border since July 12, as well as demanding the liberation of the occupied territories of the Republic of Azerbaijan. Our compatriots reaffirmed their support for our state, people and army by chanting slogans “Long live Azerbaijan!”, “Long live our state!”, “Martyrs will not die, the homeland will not be divided!”, “Karabakh is Azerbaijan”, “Justice for Khojaly”, “End the Armenian occupation”. and said they were looking forward to the Supreme Commander-in-Chief’s order. The protesters sang the national anthem of Azerbaijan, the military march and other patriotic songs with great enthusiasm and love, managed to stifle the voices of the provocateurs and gave the necessary response to the Armenian provocateurs.

During the demonstration, documents of relevant international organizations exposing Armenia’s aggressive policy against Azerbaijan for decades were sounded. Some Turkish and Georgian friends living in Belgium also supported our Azerbaijani protesters.

Aggressive Armenian radicals gathered in front of the premises of the diplomatic mission and committed mass atrocities against diplomatic mission and our peaceful compatriots, who defended their homeland. As a result of the attack of the Armenian aggressors with stones, sharp cutting tools and explosives, 6 members of the Azerbaijani Diaspora, as well as the correspondent of the European bureau of “REAL TV” Khatira Sardargizi were injured and received medical treatment. Some diplomats were also injured, the mission’s administrative building was destroyed, windows were broken, and the personal car of an Azerbaijani community representative was damaged.

There was attempt to penetrate to the premises of the Embassy and to attack the residences of diplomats and their family members.

The Belgian police, which coordinated the incidents with a large number of land and air forces, prevented the provocations of the treacherous enemy, drove them away from the area with water cannons, and duly recorded the relevant destruction and aggression. According to the current information, 17 Armenian provocateurs were detained by law enforcement agencies.

In general, detailed reports and protocols on the events were prepared and an official appeal was sent to the Ministry of Foreign Affairs of the Kingdom of Belgium and other relevant agencies, demanding the punishment of Armenian criminals.

Despite all this, our peace-loving and brave Azerbaijanis, who are in the spirit of high patriotism, managed to silence the rogue Armenian protesters with their slogans and statements.

The Embassy of the Republic of Azerbaijan in the Kingdom of Belgium and the Grand Duchy of Luxembourg, as the Representation to the European Union, thanks all our compatriots.

We are proud of our compatriots who are united for the defense of our Azerbaijan!

The Republic of Azerbaijan is always together with its compatriots!
Source: https://brussels.mfa.gov.az/news/4/3430