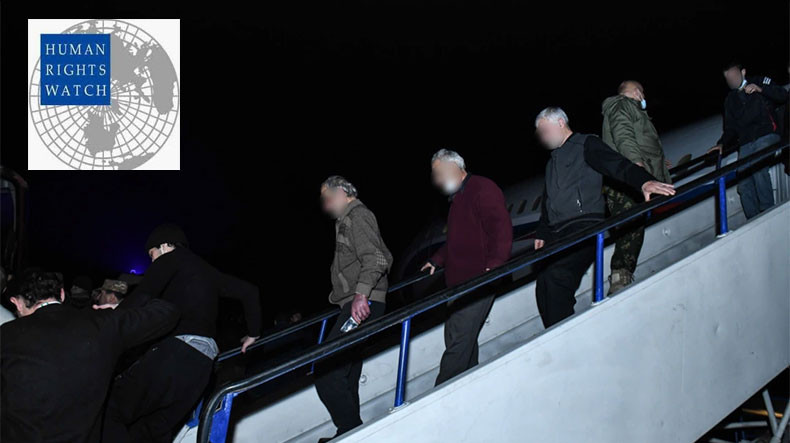 Azerbaijani NGO – Legal Analysis and Research PU appealed to the Human Rights Watch, demanding objectivity and fairness in regard to the Report on alleged violations of the rights of Armenian “POWs” in Azerbaijan. At the letter addressed by Ramil Iskandarli, Chairman of the Legal Analysis and Research PU to the Kenneth Roth, Executive Director of Human Rights, the followings are stated :

“We, as an NGO, operating in Azerbaijan, expressing our deep concern about the absolute lack of balanced and objective approach of Human Rights Watch in regards to the “44 day war” problems.
Armenia itself, didn’t fully implement the requirements of the Trilateral Statement of November 10, 2020 signed by the leaders of Azerbaijan, Armenia and the Russian Federation.

Those sent by Armenia after the Trilateral Statement to the territory of Azerbaijan in order to sabotage peace and commit terrorist acts, cannot be considered as POWs in accordance with Geneva Conventions and other international humanitarian law norms. All other POWS which were under the protection of Geneva Conventions were released.
For the sake of objectivity, please note, that Armenia still has to present a map of the mined zones in the recently liberated territories of Azerbaijan in order to reduce a risk of causalities caused by mine explosions. It should be mentioned that nearly a hundred of Azerbaijani servicemen and civilians were either killed or wounded by mine explosions after the 10 November Trilateral Statement which is also another breach of customs of war committed by Armenia.

The investigations conducted by the Prosecutor General’s Office of the Republic of Azerbaijan have determined that members of a number of terrorist organizations, including foreign nationals, have illegally crossed the state border of Azerbaijan and established illegal armed groups after the Trilateral Statement of November 10, 2020. As a result, terrorists,
including mercenaries, attacked and murdered several civilians and soldiers in liberated Hadrut area of Azerbaijan. It should be stressed that those terrorists, illegal fighters and mercenaries do not have the rights for protection as PoW in accordance with relevant provision of Geneva Conventions. According to the Article 47 of Additional Protocol I (1977) to the 1949 Geneva Convention for the Protection of Victims of International Armed Conflict, they do not have the status of a combatant or prisoner of war.

The UN General Assembly’s 1970 Declaration on Principles of International Law concerning Friendly Relations and Cooperation among States, prohibits UN member states from engaging illegal fighters in conflicts. Undoubtedly, those fighters who crossed the state borders f Azerbaijan after the military conflict is over, are recognized as criminals under the international law and must be brought to justice as criminals. Universal jurisdiction has been established in accordance with the principle of “aut dedere aut judiciare” (obligation to prosecute). Involvement of illegal fighters and mercenaries is prohibited under the customary norms of international humanitarian law. Therefore, we believe that the Human Rights Watch will demonstrate its commitment to the principles of fairness and objectivity while considering issues related to the “44 day war”.