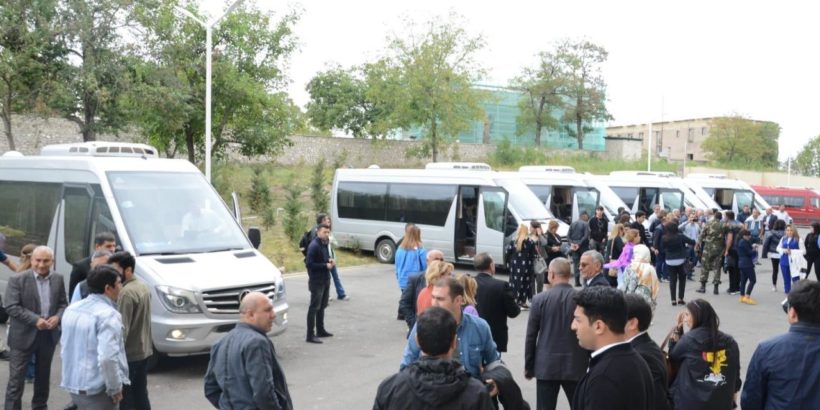 Representatives of around 300 non-governmental organizations (NGO) operating in Azerbaijan made a trip to the city of Shusha, liberated from Armenian occupation, Trend reports.

“The visit of non-governmental organizations to Shusha is very important. The participants of the trip witnessed a terrible picture of destroyed villages, devastated settlements, and cut down forests” Vusal Guliyev, a senior official of the President of Azerbaijan, Deputy Chairman of the Supervisory Board of the NGO State Support Agency, who is accompanying the delegation.

According to ShushaNews, chairman of the Legal Analysis and Research Public Union, Ramil Iskandarli was among the visitors. Ramil Iskandarli said that “If a land truly belongs to you, you never get tired of rebuilding and reviving it. New construction and rebuilding sites in Shusha, prove it. Shusha is reviving!”.

The participants of the trip, which is organized by The Agency for State Support of Non-Governmental Organizations of Azerbaijan, first visited Jydyr dyuzu. This area near the city of Shusha, where historical horse races were held and local Azerbaijanis celebrated Novruz since the time of the Karabakh Khanate, made an unforgettable impression on the guests.

Then the guests visited the oldest mosque located on the central square of the city – the Juhara Govhar Agha Mosque (built-in 1769).

In the central square of the city of Shusha, the delegation saw the monuments of famous figures of Azerbaijani culture – Natavan, Bulbul, and Uzeyir Hajibeyli, as well as other cultural monuments, administrative and residential buildings, that were also subjected to destructive actions by the Armenian military forces for almost 30 years.