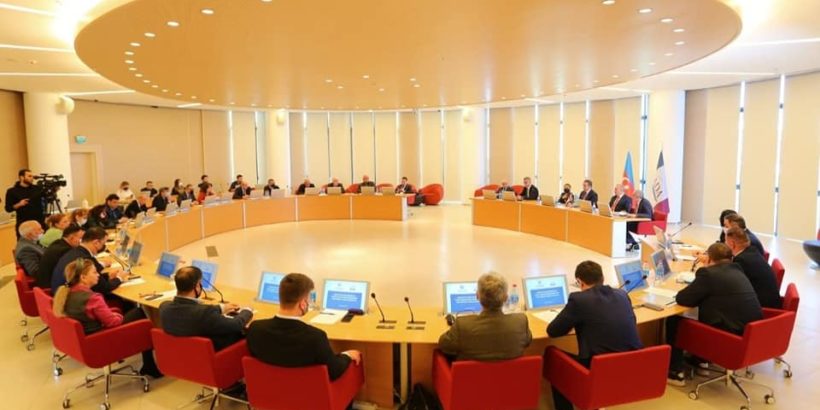 Recently, in the interview, the President of Azerbaijan Ilham Aliyev responded to journalists’ questions about the work done in Azerbaijan in the economic and social spheres in 2021, relations between Azerbaijan and Armenia, reconstruction work carried out in the liberated territories, as well as the country’s foreign policy and other issues. He also talked about the fight against corruption, accountability, public oversight, and public participation in the decision-making process.

President Ilham Aliyev mentioned that “We must create an atmosphere in society that would strengthen public oversight. You know perfectly well that I have repeatedly expressed my views on this issue, and not just for the sake of saying it. Because if this were the case, I would say it only once. I always say this, I appeal to our citizens not to remain indifferent and exercise control. Public oversight will deter many officials from engaging in such criminal activities. Therefore, some institutional format of public oversight needs to be developed. Government officials should know that their work is monitored not only by the Presidential Administration but also by the civil society and the media”.

On January 15, 2022, the Agency for State Support to Non-Governmental Organizations of the Republic of Azerbaijan held a roundtable discussion at ADA University on “The Role of Non-Governmental Organizations in Combating Corruption and Strengthening Public Oversight” with the participation of NGO leaders who are actively participating in public councils and in anti-corruption activities.

“The Agency for State Support to Non-Governmental Organizations has a great responsibility to strengthen public control in the fight against corruption and to prevent this issue. It is important to bring public councils together under one umbrella to fight corruption together”- this was stated by Vusal Guliyev, Deputy Chairman of the Supervisory Board of the Agency of State Support to Non-Governmental Organizations.

The head of the agency said that the projects and proposals of NGO representatives will be received in this regard, adding: “Consider the proposals of NGO representatives and the necessary decision will be made. Staff is also being set up to develop proposals. There are so many mechanisms that it is impossible to create them without a legal basis.” Vusal Guliyev noted that there are problems and shortcomings in the activities of public councils and NGOs.

Then the different opinions and proposals from the members of the Supervisory Board Israyil Isgandarov, Azer Allahveranov, Zaur Ibrahimov, and the representatives of the NGOs Ramil Iskandarli, Alimammad Nuriyev, Hafiz Hasanov, Sevinj Alizade, Mahammad Guluzade, Samir Isayev, Jasarat Huseynzadeh Gorkhmaz Ibrahimov, Telman Isa, Ahmad Abbasbeyli, Garay Alibeyov, Emin Hasanli, Rauf Zeyni, Jeyhun Musaoglu, Agil Jamal, Elshad Mammadli, Ramil Iskandarli, Matanat Askergizi and Shalala Hasanova were heard. They noted that NGOs have always been active in the fight against corruption and strengthening public control, and then made a number of proposals to expand such activities.

Ramil Iskandarli, head of the Legal Analysis and Research Public Union, who attended the event, noted the importance of the roundtable by saying:

“I believe that there is a need to increase the “Watchdog” functions of Public Councils. Generally, watchdog organizations are non-profit individuals or groups that keep an eye on a particular institution or element of community concern and alert them when potential or actual problems arise. The watchdogs may be interested in a variety of issues, from the actions of a single individual to the policies of any institution that has caused dissatisfaction among citizens in general. Watchdog organizations differ in their activities. For some, the goal is simply to sound the alarm. Others may try to use their information actively to prevent problems. Some seek to resolve problems through administrative proceedings or litigation with individuals or entities they see as a threat to the public interest or the well-being of society.

In general, yesterdays’ meeting at ADA was organized in the format of brainstorming, which allowed everyone to voice their views and suggestions. A number of valuable suggestions were voiced in relation to a certain institutional format of the public oversight functions of civil society. Opinions were expressed on the necessity of improving legislation, the creation of new mechanisms of public oversight, analyses international standards and foreign experience, empowerment of NGOs on the basis of existing public governance mechanisms, enhancing monitoring functions, relations between media and NGOs, and issues of the overall coordination of the work of public councils. The approaches were really diverse. I think that such discussions need to continue in various formats (such as working group, expert consultations, etc.)”.