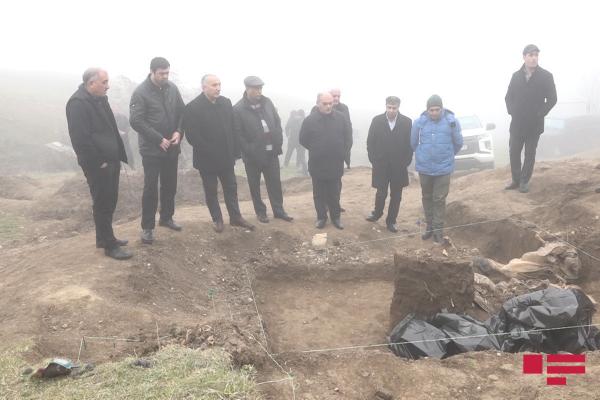 A mass grave has been discovered in the village of Edilli in the Khojavend region. It was determined on the basis of statements and materials collected by the working group of the State Commission on the issues of PoWs, hostages and missing citizens. According to preliminary data, there are the remains of 15-20 people.

It also became known about the existence of other mass graves in the liberated cities of Aghdam, Fizuli, Khojavend and Shusha. Gradually, as the territories are cleared of mines, the graves will be discovered. A group of NGOs paid a visit to the mass graves in February 25, 2022, located in the village of Edilli in the Khojavend region recently liberated from 30 years of occupation.

Along with other NGOs, Ramil Iskandarli, Chairman of the Legal Analysis and Research Public Union, and Fariz Akbarov, a project lawyer, also participated in the fact-finding mission and conducted a legal assessment of the situation. According to the chairman of the organization Ramil Iskandarli, “From the human rights point of view. without respect for the right to life, no other human right can be upheld. Extrajudicial, or arbitrary executions – meaning the deliberate killing of individuals outside of any legal framework – are a violation of this most fundamental right”.

According to the customary international humanitarian law, the Murder of civilians and prisoners of war was included as a war crime in the Charter of the International Military Tribunal at Nuremberg.[2] Common Article 3 of the Geneva Conventions prohibits “violence to life and person, in particular murder of all kinds” of civilians and persons hors de combat.

A reported case of the disrespectful disposal of dead civilians in Papua New Guinea was condemned by the UN Special Rapporteur on Extrajudicial, Summary or Arbitrary Executions.

The Geneva Conventions specify that the dead must be buried, if possible, according to the rites of the religion to which they belong. The Geneva Conventions furthermore require that, in principle, burial should be in individual graves. Collective graves may only be used when circumstances do not permit them. These requirements are also set forth in numerous military manuals.

According to Ramil Iskandarli, as an NGO, they will send an appeal to the UN Special Rapporteur on Extrajudicial and Arbitrary Executions Morris Tidball-Binza and ask him to pay a visit with a fact-finding mission related to mass graves, discovered in Azerbaijan.