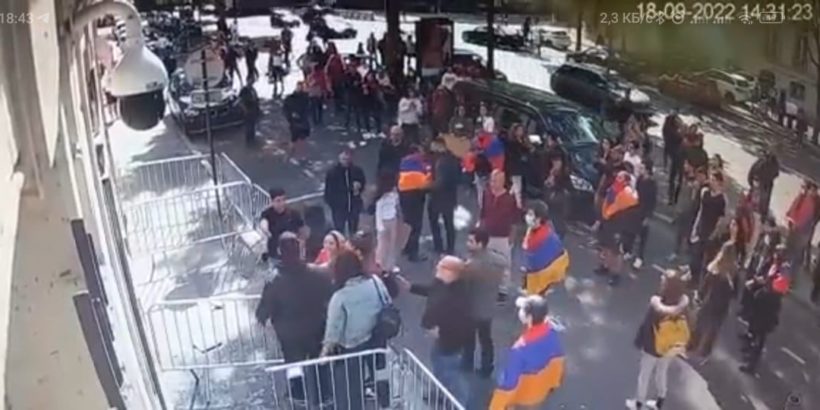 Baku/18.09.22/Turan:  Today, the Armenian radical nationalist elements attacked the Azerbaijani embassy in Paris with the full connivance of the French authorities, the Ambassador of Azerbaijan to France Rahman Mustafayev reported.

“Armenian fanatics are storming the building of the Azerbaijani embassy in France. But let’s leave the Armenian barbarians aside. Mr. Emmanuel Macron shame on France for not protecting embassies and ignoring our legitimate requests for our security,” the ambassador tweeted. He also distributed video footage of a group of youths with Armenian flags storming the embassy building.

The day before, an aggressive crowd with Armenian flags also tried to attack the Azerbaijani embassy in Beirut in Lebanon. And judging by the footage from social networks, the Lebanese police could hardly manage to restrain  them.

Today, the police in Tbilisi did not allow aggressive Armenians to approach the Azerbaijani embassy in Georgia.

On September 18, the Azerbaijani Foreign Ministry issued a statement expressing concern about attacks on the country’s diplomatic missions abroad.

Attacks by members of the Armenian communities on the buildings of Azerbaijani diplomatic missions in foreign countries are of serious concern, the press service of the Azerbaijani Foreign Ministry said.

These attacks, containing elements of vandalism and terrorism, are aimed at causing harm to diplomats and their property, in connection with which they are characterized as actions that entail criminal liability.

“We strongly condemn the criminal actions of radical Armenian groups and expect a responsible attitude to their duties from the structures responsible for preventing such provocations in the respective countries,” the statement of the  Azerbaijani Foreign Ministry.

The Azerbaijani side demands an investigation by the law enforcement agencies of the relevant states of acts of vandalism committed by Armenian radicals and a legal assessment of the actions of the perpetrators of these crimes.

The Ministry of Foreign Affairs of Azerbaijan recalls that in accordance with the Vienna Convention on Diplomatic Relations of 1961, the host state has a special obligation to take all appropriate measures to protect the premises of the mission from any intrusion or damage and to prevent any violation of the peace of the mission or insult to its dignity.