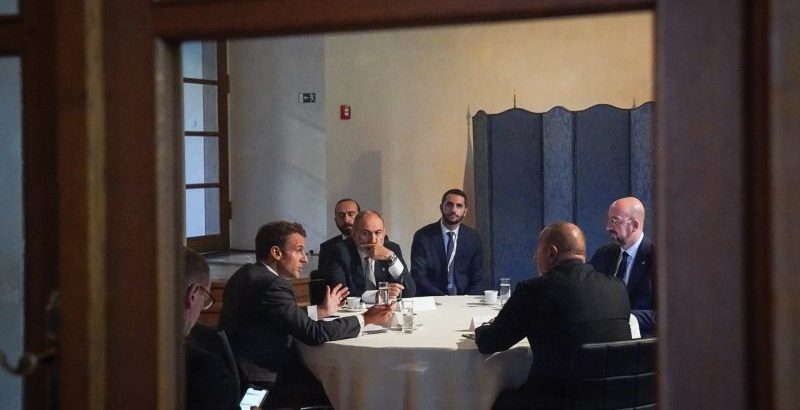 In a fresh four-way mediation effort to resolve the stand-off between Yerevan and Baku, stakeholders announced on Thursday (6 October) the EU will send a ‘civilian mission’ to Armenia to help delineate borders with Azerbaijan.

“There was an agreement by Armenia to facilitate a civilian EU mission alongside the border with Azerbaijan. Azerbaijan agreed to cooperate with this mission as far as it was concerned,” according to a joint statement issued after talks.

It will start in October for a maximum of two months, with the aim “to build confidence, and… contribute to the border commissions”, it added.

According to the joint statement, Armenia and Azerbaijan also confirmed their commitment to the UN charter and “the Alma Ata 1991 Declaration through which both recognize each other’s territorial integrity and sovereignty”.

The announcement came days after Armenian and Azerbaijani foreign ministers met for talks in Geneva to begin drafting the text of a future peace treaty.

Alma Ata or Almaty was the capital of Kazakhstan at that time. The Alma Ata Treaty of 1991 established the principles of the Commonwealth of Independent States (CIS), including recognising and respecting each other’s territorial integrity and the inviolability of the existing borders. The Alma Ata Treaty however didn’t prevent full-scale fighting erupting between Armenia and Azerbaijan over Nagorno-Karakakh, in the winter of 1992.

Last month Yerevan and Baku accused each other of breaking a cease-fire between the warring nations as at least 286 people were killed on both sides before a US-brokered truce ended the worst clashes since 2020, when simmering tensions escalated into all-out war.

The four-way talks on the sidelines of the forum, a new consultation forum of 44 European leaders meant to discuss peace and prosperity across the continent, was also its most remarkable photo op.

The EU repeatedly has tried to step into the diplomatic breach, presenting itself as a mediator.

The EU needs stability in the South Caucasus, a region becoming even more important in the context of tensions with Russia. The EU needs the gas supplies from Azerbaijan and banks on a ‘Central corridor’ linking with Asia crossing from the Black Sea to the Caspian Sea.

In August, Brussels hosted a trilateral meeting between Pashinyan and Aliyev for talks on how to avert future clashes, with Michel announcing a meeting between border authorities to take place in November.

However, with so far no significant EU presence on the ground, it has been not in a position to enforce the ceasefire terms.

EU diplomats have said they were ‘cautiously hopeful’ progress in the Armenia-Azerbaijan normalisation process would be possible.

Macron, looking absorbed and tense, tweeted an image of the four leaders gathered around a table with the comment: “For a lasting peace in the Caucasus”.

Following the meeting, Azerbaijan’s President Ilham Aliyev told reporters from his country that the peace process with Armenia “has now been accelerated.”

Aliyev also said that the foreign ministers of the two countries would meet again “soon.”

“We suggested that the working groups of the two countries meet and work on the preparation of the peace agreement text for a few days. Such is our intention,” he was quoted as saying.