“ In November 24, 2020, the “Legal Analysis and Research” Public Union conducted the Baku International Virtual Humanitarian Law Conference via Zoom online platform. The conference is conducted in cooperation with the State Committee on Work with Diaspora of the Republic of Azerbaijan and supported by The Council on State Support to NGOs under the Auspices of the President of the Republic of Azerbaijan.
The key issue of the conference was the protection of civilians in armed conflicts.
Sessions on humanitarian law and human rights aspects of the protection of children and women in armed conflict as well as the role of non-state actors, such as NGOs in designing the future steps of actions for work with civilians affected with the consequences of the war were discussed. 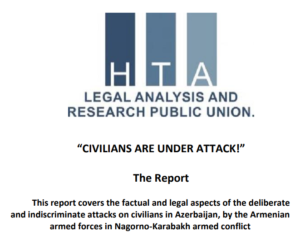 In international humanitarian law, the protection of civilians is not the same as the protection of combatants. This difference is particularly relevant in the conduct of hostilities: there is a fundamental distinction between civilians and combatants, and between military objectives and civilian objects. Combatants may be attacked until they surrender or are otherwise hors de combat, while civilians may not be targeted, unless and for such time as they directly participate in hostilities, and they are protected by the principles of proportionality and precaution against the incidental effects of attacks against military objectives and combatants.

The report “Civilians are under attack” prepared by the Legal Analysis and Research Public Union is presented at the conference by the moderator:

100 civilians have been killed, 416 injured and around 5000 houses and other civilian facilities were seriously damaged as a result of Armenia’s heavy artillery attacks on Azerbaijan’s densely populated areas during 44 days war.

Amnesty International has verified the use of banned cluster bombs by Armenia, following an attack on the city of Barda in Azerbaijan, media reported quoting the statement released by Amnesty International. At least 21 people were killed, with an estimated 70 more injured in this attack. Amnesty International’s Crisis Response experts verified pictures (taken by Vice News reporters in the city) of fragments of 9N235 cluster munitions from Russian-made 9M55 Smerch rockets, that appear to have been fired into the city by Armenian forces. 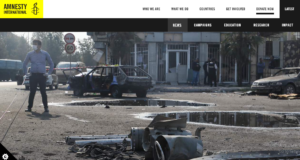 Geneva Convention IV and Protocol II codify the principles according to which the civilian population as such, as well as individual civilians, shall not be the object of attack. The Declaration on the Protection of Women and Children in Emergency and Armed Conflict says that, attacks and bombings on the civilian population, inflicting incalculable suffering, especially on women and children, who are the most vulnerable members of the population, shall be prohibited, and such acts shall be condemned. 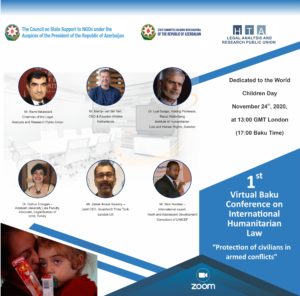 This conference was conducted online and symbolically dedicated to the UN World Children Day. Representatives of the International Organization for Migration, International Red Cross Committee, Raoul Wallenberg Institute of Human Rights and Humanitarian Law (Sweden), Advocates, professors and students from Adakent University, Quantum5 Think Tank (UK), Athelos NGO (Netherlands), individual experts from UN CEDAW Committee, AmCham and UNICEF as well as national NGOs, representatives of Azerbaijani diaspora in Europe, and legal experts took an active part at the conference. It was decided that the conference will be held annually online or offline. The Organizer and Moderator of the Conference, Ramil Iskandarli suggested the next offline conference to be held next year in Baku or Shusha, Azerbaijan. 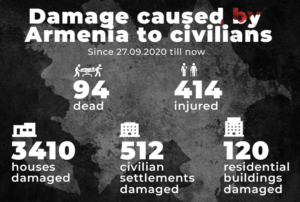 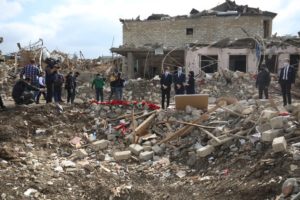