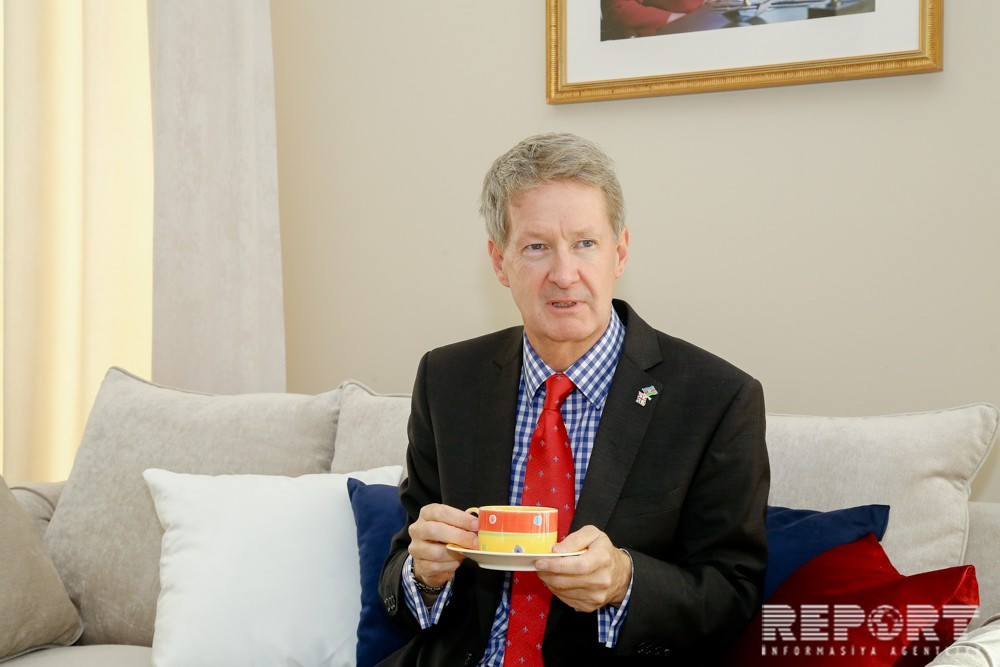 Interview of Report News Agency with the UK Ambassador to Azerbaijan Mr.James Sharp.

– Mr. Ambassador, your diplomatic activity in Azerbaijan began a couple of months ago. What are your first impressions of our country?

– My first impression was fantastically positive. I was here for the Chelsea-Arsenal Europa League Final in May. Chelsea won 4-1, so as a Chelsea supporter, it was wonderful!

And my second impression was very positive too. Baku feels like a really beautiful European city. The architecture in the town centre is amazing, and I love just walking around downtown looking at the buildings. And the Heydar Aliyev Centre is crazy – in a good way!

I’ve been made to feel extremely welcome here. The people are so nice and very welcoming. So many have studied in the UK, or speak English. And Azerbaijani people have a real sense of family, tradition, and hospitality.

In terms of the British profile here, I was lucky to arrive just before the celebration of the 25th anniversary of the Contract of the Century, which made really clear the British contribution in Azerbaijan.

So I’m very happy to be here and really looking forward in the next 3 years to discover the country and the people.

-You speak Azerbaijani well enough. Where did you learn the language?

I speak just a little bit! I studied it in London and had an Azerbaijani teacher there. And I had a few weeks in Baku and Ganja.

Azerbaijani is a difficult language to learn, I’ll be honest. But for us, in the Foreign Office, trying to learn languages is a mark of respect for the host country.

– How do you assess the current level of UK-Azerbaijani cooperation?

– I think the level of our cooperation is excellent. Our cooperation has a very solid base, and, as I said, now we’re shifting the focus towards the future. We’re supporting reforms here. The President is clearly very focused on that, and I was also very impressed by the young and energetic ministers I’ve met so far, who want to make a difference here. They have a very positive outlook, a very positive agenda. So we can work together and do more in some spheres.

– A number of reforms are underway in Azerbaijan aimed at developing the non-oil sector, including agriculture, the development of the business environment, and the agro-industrial complex. How do you assess them and what contribution can the UK make in this regard?

– I met the President and we were talking about the importance of developing the non-oil sector. Clearly, there is much energy cooperation, BP and other British companies are operating in that sector. But as I said we are looking to the future, beyond hydro-carbons, oil and gas.

There’s already a large amount of British cooperation in different sectors, but in terms of developing of the non-oil sector, I think first of all the State Oil Fund of Azerbaijan has an important role here in terms of providing for future generations. That is, the government isn’t spending all money now but thinking how to save money so future generations can benefit from the oil wealth.

The second strand is to diversify the economy and to develop the non-oil sector. We’re already very much involved in that. A lot of this is about providing support, consultancy and advice. For example, we hosted a visit by the Ministry of Agriculture this year. We’re looking to sign a Memorandum of Understanding (MoU) between ASAN and British Government Digital Service.We’re also cooperating between hospitals in the health sphere, and are hoping that there will be a big delegation from Azerbaijan to the UK in February next year. We’ve also funded – for the first time – a Chevening scholarship to study medicine in Britain.

Another sphere is Space – we’re looking to sign a Memorandum of Understanding (MoU) between Azercosmos and the British Space Agency, which is the leading space agency in Europe.