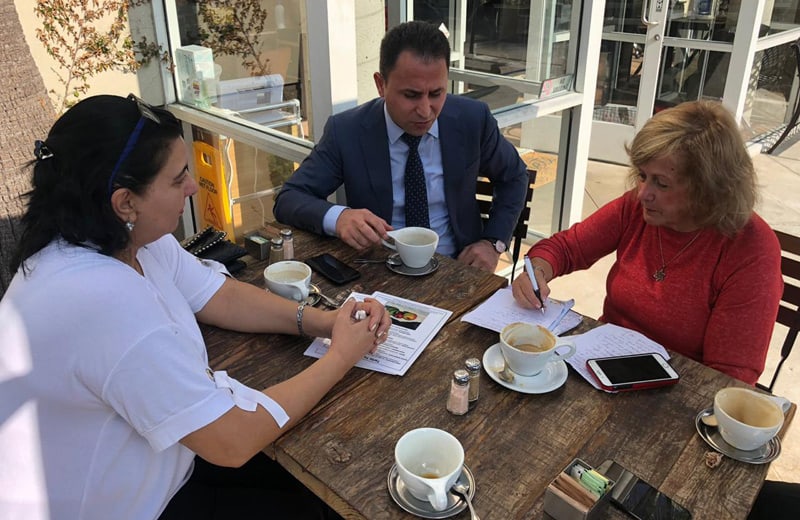 NewsBlaze: It is most difficult to put into writing a story told by people who have suffered tremendously. That’s what happened when I recently met with three men and one woman at a lovely café in Beverly Hills, California. Sitting in the company of Mr. Tural Ganjaliyev, the Chairman of the Azerbaijani Community of the Nagorno-Karabakh region of Azerbaijan; Mr. Gulmammad Mammadov, Professor at ADA University in Azerbaijan and a refugee from Karabakh; Mrs. Durdane Agayeva, a survivor of the Khojaly Massacre; and Mr. Jeyhun Alakbarov, a survivor of the Khojaly Massacre and a board member of the Community, makes you realize what life is all about.

The four are on a speaking and interview tour in Los Angeles. The purpose of the tour is to tell their stories; stories they have passionately told me, with one ending message: we hope for peace, we hope to be able to return to our homes and land. We pray life can be normalized and coexistence between all people in the Nagorno-Karabakh region becomes reality again, just as it was for centuries before Armenia invaded the region, performed atrocities and remained to illegally occupy 20% of Azerbaijan’s sovereign land.

The city was populated by Azerbaijanis till its occupation. After the invasion, Armenia has changed the town’s name into “Shushi,” a more Armenian-sounding name and has tried to erase all traces of Azerbaijan’s once presence there, performing overall cultural cleansing against Azerbaijani heritage in Karabakh. Mosques were demolished and some of them desecrated. The still standing ones have gone through architectural character alteration and are presented as Persian mosques.

The Khojaly Massacre, was the killing of ethnic Azerbaijani civilians from the town of Khojaly, on February 26, 1992. According to Azerbaijan, as well as the Memorial Human Rights Center, Human Rights Watch and other international observers, the massacre was committed by the Armenian armed forces, reportedly, with the help of some Russian military personnel. The death toll of the civilian population massacre amounted to 613 Azerbaijanis, including 250 infants, children, women and elderly. The Human Rights Watch called it “the largest massacre in the Nagorno-Karabakh conflict,” which was the most horrendous act of violence.