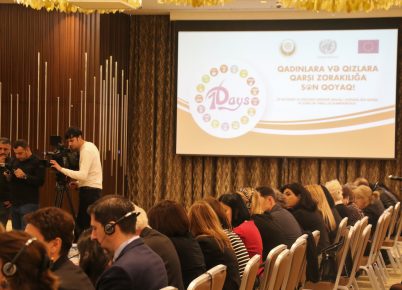 BAKU, 25 November 2019 – The United Nations (UN) Office in Azerbaijan, together with the State Committee for Family, Women and Children Affairs, is launching the 16 Days Activism campaign to combat violence against women and girls (VAWG). The campaign, as implied by its name, aims to draw public attention to the VAWG phenomenon and runs throughout 16 days between 25 November and 10 December  each year.

As in past years, this year the organisers will try to attract the public’s attention to the problem of VAWG via a series of awareness-raising activities over the upcoming sixteen days. Thus, the first day of the campaign will be marked with an inception conference with participation of the representatives from government agencies, international organizations and civil society functioning in the sphere of combatting VAWG. During the campaign, video messages of the officials representing the UN Office in Azerbaijan as well as relevant government organizations calling on to end violence against women and girls, as well as PSA aimed at sensitizing the society on gender-based violence (GBV), are expected to be widely broadcasted on social media.

One of the topics around this year’s campaign is the Istanbul Convention, one of the key international legal frameworks existing in the sphere of combatting all forms of violence against women and girls. During the campaign, various booklets and other publications containing frequently asked questions with regard to the Istanbul Convention will be prepared and disseminated to the public. There will also be live discussions on the subject with the participation of experts on the radio these days.

Implemented under the slogan “Stop Violence Against Women and Girls”, this year’s 16 Days of Activism campaign is country-wide. During the campaign, posters containing information on where to apply for receiving professional care services in case of a GBV incident will be placed at public places throughout the country (subway, bus stops, shopping malls etc.). Additionally, as a result of cooperation with the State Committee for Work with Religious Organizations and the Caucasus Muslims Office, it is expected that Friday khutbas to be read at mosques across the country over the next two weeks will also include points about inadmissibility of violence against women and girls in the context of the religion of Islam.

Considering the importance of raising awareness of all groups of the population, especially young people, a series of trainings for youngsters are also planned to be carried out within the campaign. The trainings will take place in five regions of Azerbaijan – Masalli, Bilasuvar, Shamkir, Gazakh and Guba – and serve to sensitize youth in the regions on the topic of violence against women and girls.

A tripartite Memorandum of Understanding is also expected to be signed between the UN Office in Azerbaijan, State Committee on Family, Women and Children Affairs and Azerbaijani Bar Association. The document will enable the parties to cooperate more efficiently to improve GBV victims’ access to relevant support and care services.

Another activity to take place in the campaign’s days will be conducting of a GBV quiz competition among social media users. Followers will be awarded with symbolic presents by responding quickly and correctly to questions posted on the UN Azerbaijan’s Facebook page.