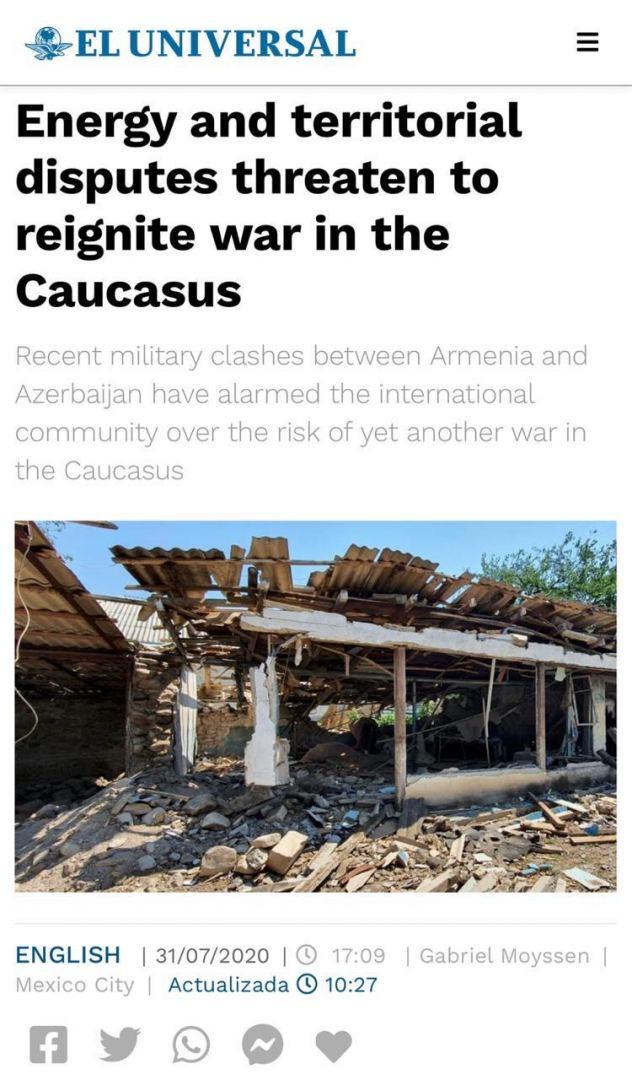 Mexico’s most influential newspaper, El Universal, published an article under the title “Energy and territorial disputes threaten to reignite war in the Caucasus” in English and Spanish, the Azerbaijani Embassy in Mexico told Trend.

“Recent military clashes between Armenia and Azerbaijan have alarmed the international community over the risk of yet another war in the Caucasus, this time involving key energy and trade routes,” said the article.

The armed incident occurred on the border of the two states, and this time the conflict is characterized by a new factor – the clashes occurred near strategic and transport projects connecting the South Caucasus, Central Asia and Europe, the article reads.

This created a threat to the Baku-Tbilisi-Kars (BTK) railway as well as to the Baku-Tbilisi-Ceyhan (BTC) pipeline, which passes through the territory of Azerbaijani Tovuz district and represents an exceptional significance in the context of ensuring the energy security of Europe, said the publication.

The article emphasized the fact that Nagorno Karabakh belongs to Azerbaijan is recognized by the entire international community, including Mexico.

Referring to the statements of the Turkish side regarding the armed clashes on the state border, the article stressed that official Ankara sharply condemned the military provocation of Armenia against Azerbaijan and supported the territorial integrity of Azerbaijan.

The article also contains photographs of a residential building on the territory of the Tovuz district, which was damaged as a result of shelling from the Armenian side.