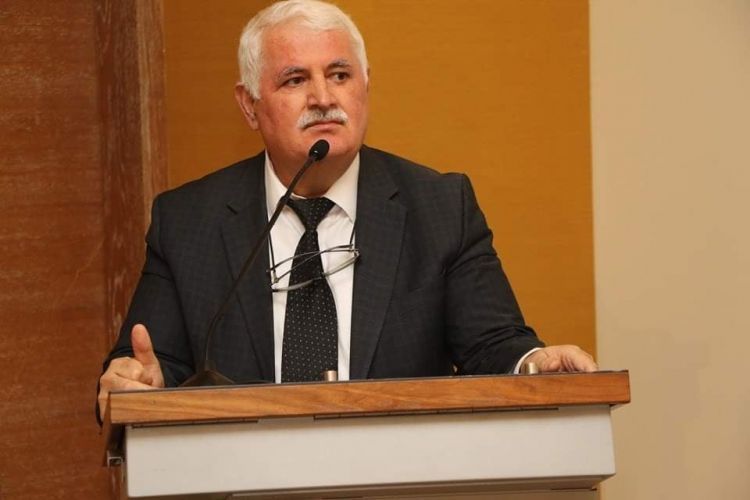 Former Armenian President Serzh Sargsyan held a press conference on the April Four Day War, as he promised before. It should be noted that this is the first press conference since his resignation. During the conference, he answered journalists’ questions and made bizarre statements about Azerbaijan.

“It is obvious that wars are not an end in themselves, they always pursue political goals. War is the “continuation of politics” in other ways. It is a victory for the defending side when it succeeds in aborting the aggressor’s plans with minimal losses. No warfare can be deemed successful for the attacking side if it does not achieve at least part of its political goals.

Azerbaijan has suffered great losses not only militarily, but also in the diplomatic arena. The April war proved that Azerbaijan could not solve the problem by using force, “Sargsyan said at a press conference.

“First of all, let’s talk about why Sargsyan is holding a press conference right now. This can be called not only a press conference but also Serzh Sargsyan’s delusions for the press. As it is known, Armenian Prime Minister Nikol Pashinyan has recently exposed himself and Armenia’s aggressive policy in the international arena, in the media, and in dialogues with the President of Azerbaijan. As it has been seen in recent years, the international community has confirmed this fact of occupation one after another. The conference can be seen as an attempt of Sargsyan to patronize Pashinyan, who was depressed in an interview with the BBC’s Stephen Sackur on “Hard Talk”. He is trying to divert attention from the current situation with his crazy statements.”

During his speech, Serzh Sargsyan noted that the April war was not a defeat for the Armenian people, but a victory. However, Umud Mirzayev refuted Sargsyan’s baseless statement.

“As for who was defeated in the April wars, for years international experts and diplomats have been telling us in one way or another about the unbreakable of the Ohanyan Barrier. However, the battles showed that our soldiers advanced and dispelled the myth about the Ohanyan Barrier. On the other hand, enough of our lands were liberated from enemy occupation. Although a ceasefire was signed a few days after the attack, this is not the end. Sargsyan should not forget that the day when the Azerbaijani army will liberate Nagorno-Karabakh and its lands is not far off. Recent international events and the political situation in Azerbaijan indicate this.

The IEPF president believes that the April fighting was the beginning of Sargsyan’s end.

“The April war was a direct failure, which Sargsyan was forced to resign after this.”

Commenting on Sargsyan’s views on Azerbaijan’s goals, Umud Mirzayev stressed that Azerbaijan has only one goal, and that is to liberate its lands. He said the state spared no effort in this direction.

The former president of Armenia said that there was no reason for the Armenian people to apologize to Azerbaijan. He said Armenia obeyed the law and accused Azerbaijan of aggression. He noted that in 1992, Azerbaijan fired more than 350 shells at Khankendi.

In response to Sargsyan’s remarks, Umud Mirzayev stressed that not only Azerbaijan is saying that Armenia is obliged to apologize to Azerbaijan, but also the international community.

“First of all, I want to say that Sargsyan himself is a bloodthirsty criminal. He speaks of shells falling on Khankendi in 1992, but this separatist villain is not aware that in 1989, about half of a million Azerbaijanis were deported from Armenia by vandalism. They forced our people to flee from the mountains and steep cliffs,” he said.

Looking at the history of the conflict, Umud Mirzayev spoke about the atrocities committed by Armenia.

“Have they forgotten how they committed bloodshed on Azerbaijanis in Armenia and Karabakh? Did they forget how they shot Ali and Bakhtiyar shedding first blood in Karabakh? What about Khojaly, Jamilli, Garadagli, Baganis, Ashagi Abdurrahmanli, where I was born and raised? Hundreds of villages, towns, and cities were razed. Armenians destroyed historical monuments and schools. Their material value is accounted for billions. Today we have one million two hundred thousand refugees and IDPs. The moment will come when all the Armenian people will apologize not only to us but to everyone for what they have done.”

“As a head of an international organization with a peace mission, I have always opposed and condemned bloodshed in conflicts. Looking at today, we see that those who came to power in Armenia do not lag behind each other in crime. It must be said openly. Recently, this is also reflected in the attitude of international organizations to Armenia. Sargsyan’s holding such a conference is nothing more than inappropriate patronage of Pashinyan, who has exposed himself in the world.”

It should be noted that the video of the conference posted on YouTube was negatively received and disapproved by the Armenian people.

Sargsyan said he thought the solution to the conflict would be achieved through international pressure. Umud Mirzayev believes that despite the pressure on Azerbaijan, he believes that justice will prevail.

“Azerbaijan has always been under international pressure since the beginning of the conflict. We felt it after the 907th amendment adopted by the United States. But now times have changed and time works in our favor. I am sure that our lands will be liberated as soon as possible with the support of international organizations, the world’s leading states, and progressive people. Sargsyan will also witness to this. I am also sure that the criminal elements at the root of the conflict will be held accountable and punished,” Umud Mirzayev said.
Source: Endnews.net