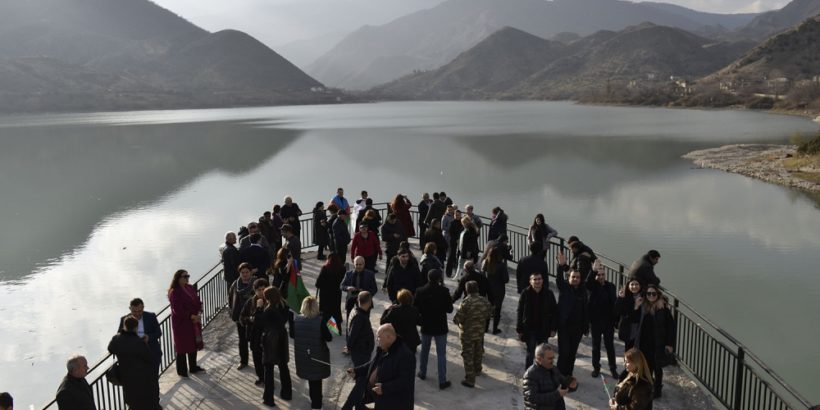 Representatives of more than 100 non-government organizations operating in Azerbaijan have visited Sugovushan settlement and Talish village of Tartar region and became witnesses of the consequences of the Karabakh war, destroyed and damaged houses as a result of indiscriminate rockets attacks.

According to Human Rights Watch, “the bombardment caused widespread destruction and many civilian deaths. Armenian forces had fired 15,500 shells on the territory of Tartar District until 29 October, with over 2,000 shells being fired upon Tartar in some days. Official Azerbaijani figures claim that over a thousand civilian objects, including schools, hospitals, and government buildings were either damaged or destroyed during the bombardment.

Human Rights Watch confirmed many of the targeted attacks on civilians and civilian objects, such as kindergartens and hospitals, by the Armenian forces. It also stated that the Armenian military forces had carried out indiscriminate rocket and missile strikes on the Azerbaijani territories and that such indiscriminate attacks were war crimes. The bombardment of the city of Tartar, as well as Azerbaijani towns and villages in the district only stopped on 10 November, when Azerbaijan signed a statement with Armenia with Russia’s mediation, ending all hostilities in the region.

Ramil Iskandarli, chairman of the Legal Analysis and Research Public Union, also took tart at the trip to Tartar region, told “ShushaNews” that, “Armenia holds a legal responsibility for all violations of human rights and humanitarian law, as well as for committing war crimes and crimes against humanity during the 44-Days war”.

The trip to Tartar was organized jointly with the Agency for State Support to Non-Governmental Organizations of the Republic of Azerbaijan and the Foundation for Promotion of Moral Values on the occasion of December 10- World Human Rights Day (APA).

During the trip, the guests were accompanied by Vusal Guliyev, Deputy Chairman of the Supervisory Board of the Agency for State Support of NGOs, an executive officer of the Presidential Administration of the Republic of Azerbaijan.

In the document, NGOs called on international organizations to investigate war crimes and crimes against humanity committed in the region as a result of the occupation policy of the military-political leadership of Armenia, to put pressure on Armenia to provide Azerbaijan with proper minefield maps and other necessary information, to support Azerbaijan in clearing mines and UXOs from the territories liberated from the occupation, to make joint efforts for the sake of peace.